A Q&A With Artist Clarissa Tossin 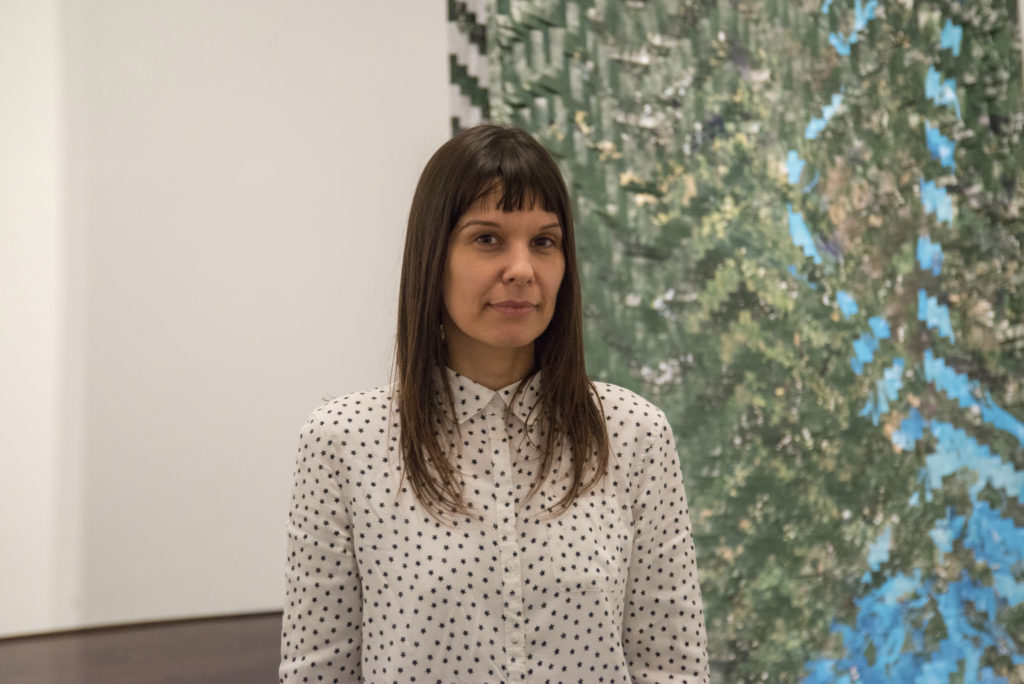 Clarissa Tossin explores a complicated history of globalization and industrialization in Encontro das Águas, an installation that takes its name from a natural phenomenon where the Negro and Upper Amazon Rivers meet but do not mix near the port of Brazilian city, Manaus.

For this installation on view at the Blanton until July 1, Tossin created a fifty-foot woven tapestry that evokes the confluence of the two rivers as well as small clusters of hand-made terracotta objects, woven baskets, and netting that recall the omnipresence of industrial manufacturing as well as material culture of indigenous groups from the area.

Installation view of Clarissa Tossin: Encontro das Águas [Meeting of Waters] at the Blanton Museum of Art, Courtesy of the artist and Luisa Strina Gallery

How did you come upon the ‘meeting of the waters’ and decide to explore it through art?

Following a trip to the Amazon Forest to shoot the video installation Streamlined: Belterra, Amazônia / Alberta, Michigan, I became interested in the city of Manaus, which was the center of the Brazilian rubber boom in the late 1800s and for the past 50 years has flourished as a Free Trade Zone and hosts the manufacturing plants of such multinational corporations as Apple, Sony, LG, HP, Panasonic, Dell, Coca-Cola, Pepsi-Cola, Harley Davidson, and Honda Motorcycles.

When I was in Manaus, I saw the confluence of the Negro and Upper Amazon Rivers in person. The image of the black and brown waters not intermixing stayed in my mind as a parallel for Manaus as a hub of different cultures due to the presence of industry in the city. 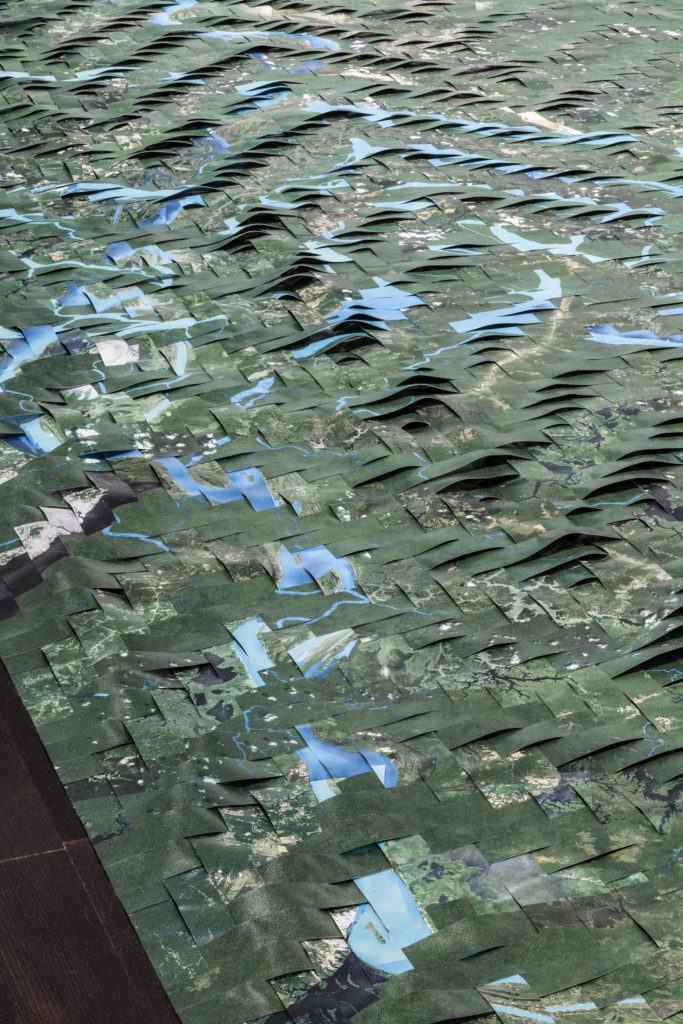 Both the tapestry and the baskets are woven from contemporary materials including aerial photographs printed on vinyl and Amazon.com boxes. Was weaving always part of your artistic practice, and how did you learn to weave?

I haven’t used weaving in prior works. For Encontro das Águas I was interested in learning from Amazonian Native aesthetic traditions and taught myself how to weave. I focused specifically on the Baniwa basketry tradition and by looking at their patterns I drew diagrams that helped me to translate the weaving to different materials. I was also interested in engaging my body in the production of the work to reflect the labour intensive aspect of basketry making in the context of these traditions. 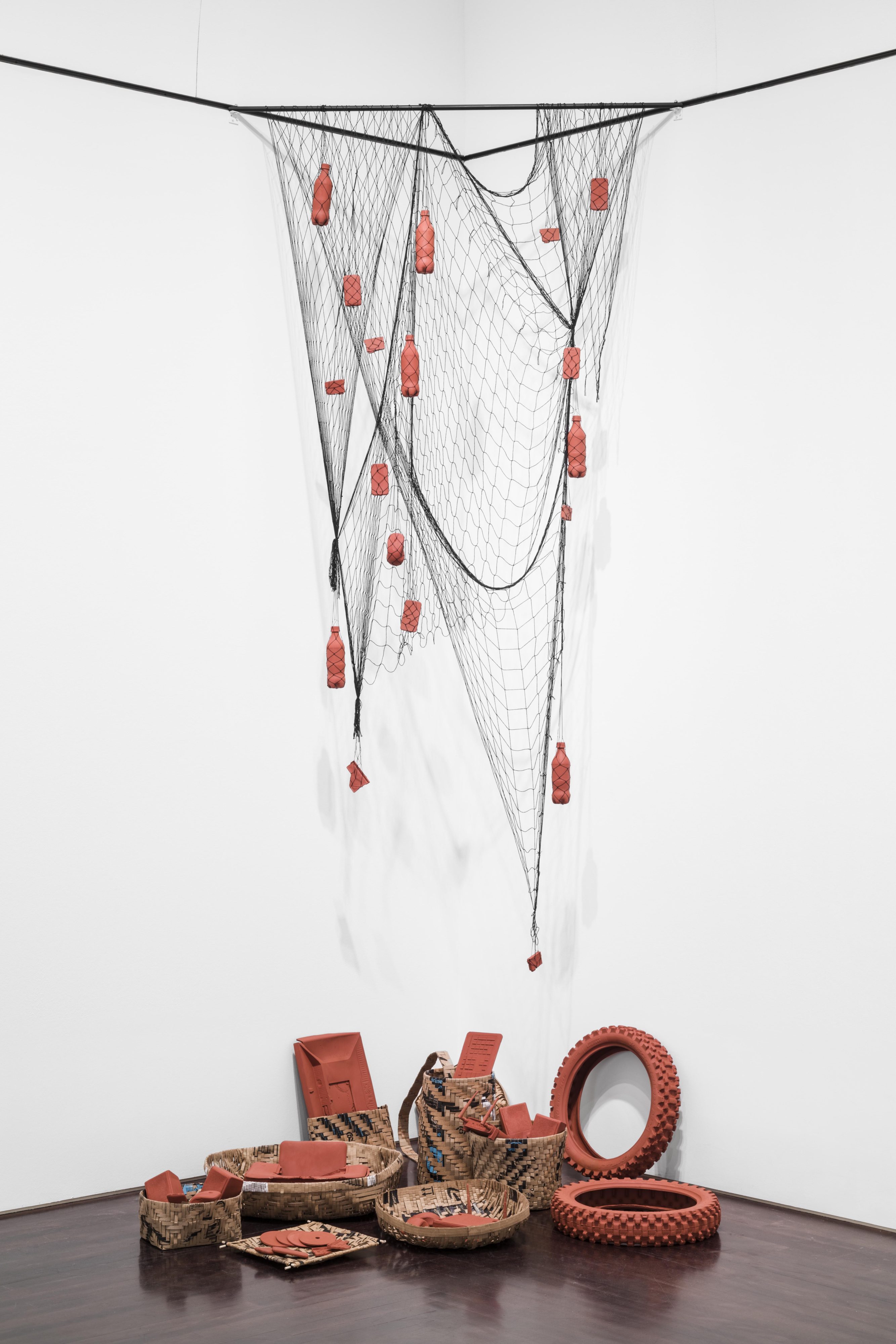 The objects you’ve made out of terracotta such as Coca Cola bottles and iPhones are widespread in our daily lives in the US and throughout the globe. What does it mean to recast them in a handmade material that indigenous groups in Brazil use to make objects like pots and food storage containers? 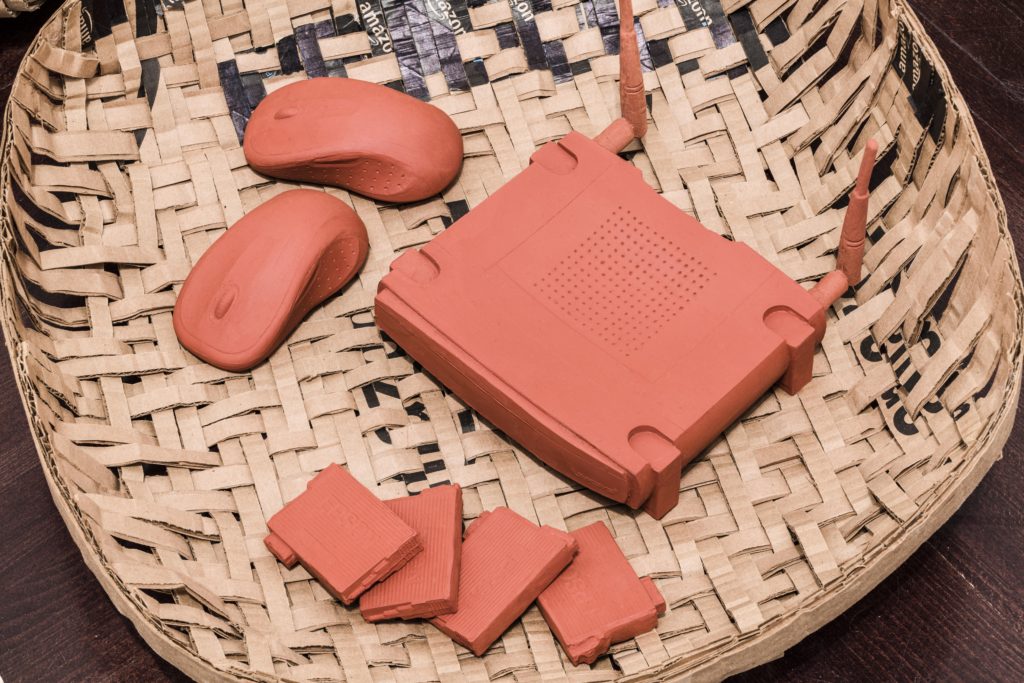 You’re from Brazil, you live in the United States, and much of your art considers the relationships between countries and cultures in the modern world. What does it mean to be a global artist today?

My work is informed by a lifetime of cultural dislocation, and voluntary migrations, starting with my birth in Southern Brazil within a community of Italian immigrant descendants, followed by growing up in Brasília (Brazil’s modernist planned capital whose population reflects Brazil’s cultural and ethnic diversity), attending college in São Paulo, graduate school in Los Angeles, with many other stops in between. Some moves were initiated by my parents, others by my own will as a young adult, and lately, the current privileged mobility I came to acquire as an artist. I mention this almost constant mobility because negotiating difference, diversity, multiplicity, hybridization and otherness have become the places from which I engage with art making. I am interested in movement as displacement, and its resulting transformations. My work is concerned with circulation: at the level of the body, at the level of global industry, and all the levels in between.

You’re currently a Radcliffe Institute Fellow at Harvard and you have work being exhibited soon at the Whitney Museum in New York and the 12th Gwangju Biennial in South Korea. What have you been working on for these projects?

For the Whitney Museum exhibition, I’ll be showing a recent commission from the City of Los Angeles for Getty’s initiative Pacific Standard Time: LA/LA. The video Ch’u Mayaa responds to the overlooked influence of Mayan architecture on Frank Lloyd Wight’s work by re-appropriating the Hollyhock House as a temple and imbuing it with a video-performance based on gestures and postures found in ancient Mayan pottery and murals. Through the movement of a female performer the house is claimed as belonging to the Pre-Columbian Mesoamerican architecture lineage. Additionally, I will be showing a series of sculptures, part of the same body of work, based on another Mayan revival style building: The Mayan Theatre in downtown Los Angeles.

For the 12th Gwangju Biennial, I will show a selection of works that are part of an ongoing body of work about the city of Brasília. I’m still working with the curator on the selection of specific works.