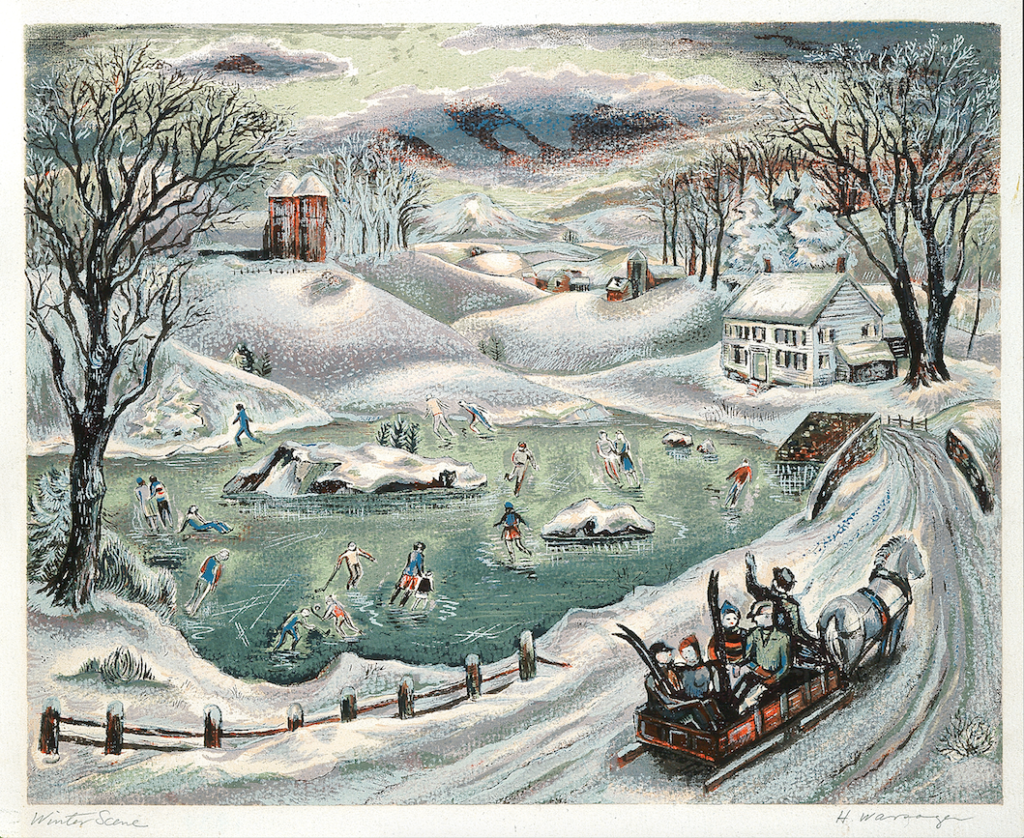 This Third Thursday, December 20, join us for a pop-up exhibition of winter scenes from the Blanton’s collection. The works cover the sixteenth to twentieth century in Europe and America, and range from allegorical depictions of the season to snowy landscapes and winter entertainments. Artists have been inspired by ice skating since at least the late fifteenth century, when the first known artwork depicting skating was made: a 1498 woodcut of Lidwina, the patron saint of ice skating, after a fall on the ice. See some of our snowiest skating scenes drawn from our permanent collection below:

Frans Huys, Skaters before the Gate of Saint George, after Pieter Bruegel, the elder, 1558/59 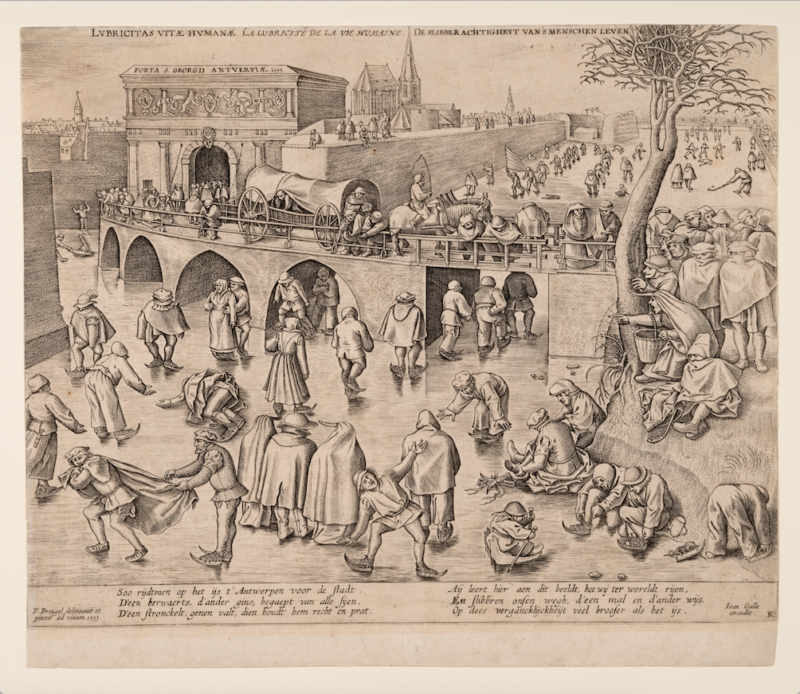 While people first ice skated by strapping animal bones to their feet millennia ago, the precursor of the modern ice skate—steel with a sharp edge—was developed by the Dutch around the thirteenth or fourteenth century. Skating was a common pastime for the Dutch, but it was also crucial to daily life and the economy. The Netherlands’ network of canals would often freeze over entirely during the winter months due to the so-called Little Ice Age (roughly the thirteenth through nineteenth centuries), which made skates and sleds essential to continuing the movement of people and goods throughout the year. 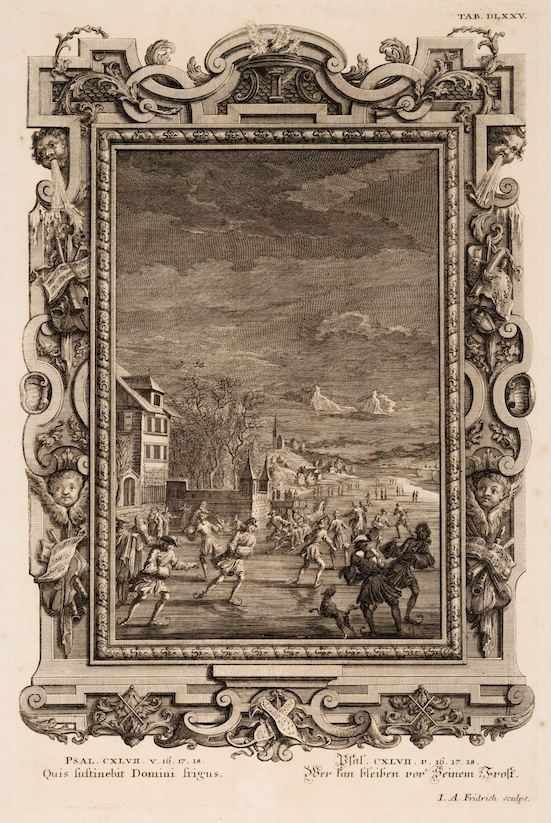 Skating was popular throughout Europe by the eighteenth century. This scene comes from the Swiss scholar Johann-Jakob Scheuchzer’s Physica Sacra, a 1731 book of natural theology. The skaters are used to illustrate Scheuchzer’s consideration of snow and ice. Scheuchzer sees the creation of winter weather as an example of God’s will, and the inscription below the engraving references Psalm 147:16-18, asking “Quis sustinebit Domini frigus,” “Who can withstand His cold.”

This scene depicts a leisurely day in the rural Northeastern United States. The figures skate alone and in pairs, and a few play hockey, much as in the Frans Huys print of 400 years previous. A group of skiers rides in a horse-drawn sleigh, suggesting the wide variety of winter activities and modes of transport. 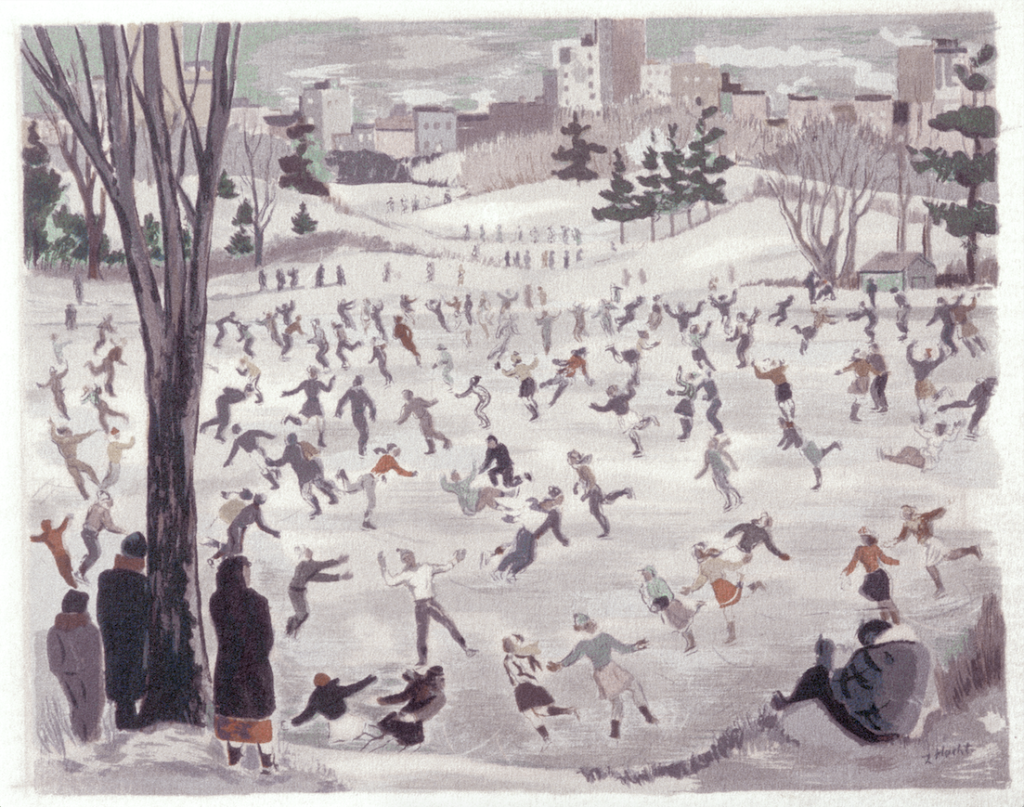 Central Park played an important role in the popularization of ice skating in the United States during the mid-nineteenth century. When a skating pond opened in Central Park in the winter of 1858-59, it quickly became a trendy destination across social classes. A main component of skating’s appeal was that it was one of the few activities that allowed single men and women to mingle unchaperoned.

The pop-up exhibition will be on view to the public in the Julia Wilkinson Center for Prints and Drawings from 5:30pm-8:30pm on Thursday, December 20. Admission is free.