Working from Fragments: A Closer Look at Two Works in the Blanton’s Collection 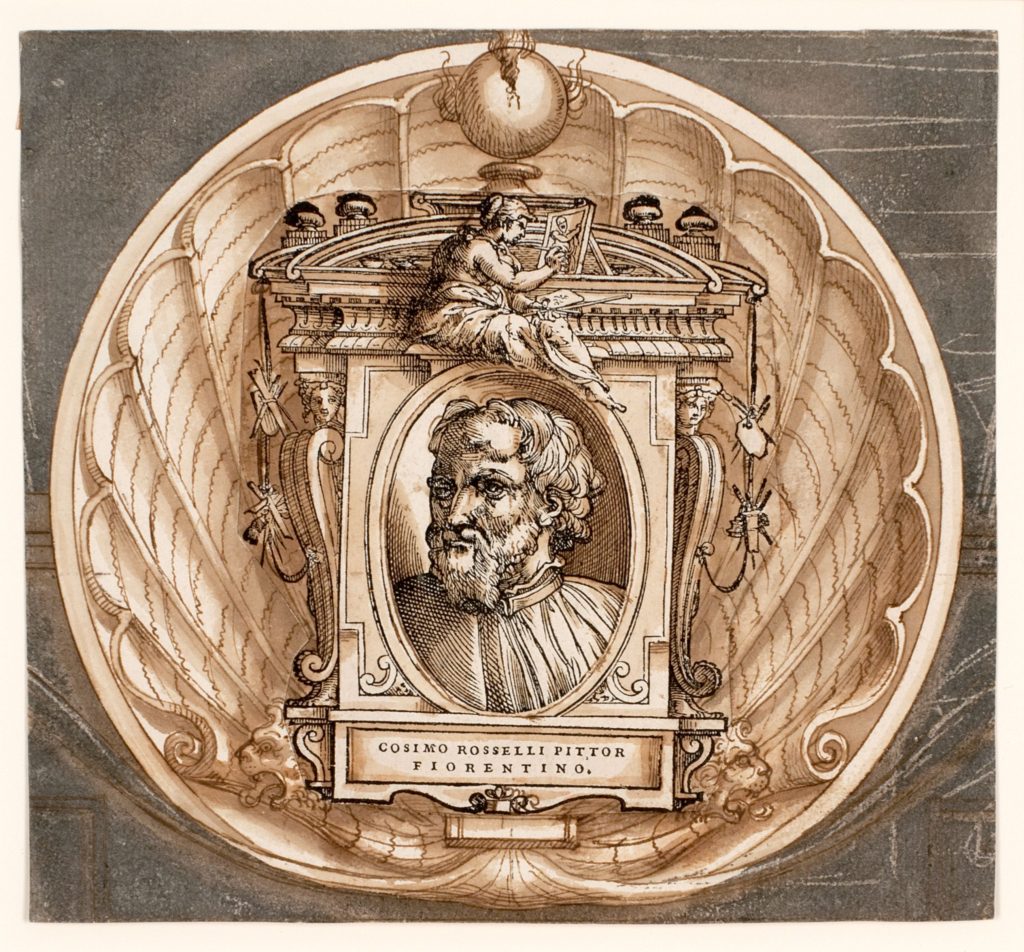 Within the Blanton’s collection of more than 16,000 works on paper, there are two that have never been shown in any exhibition to date, leaving most people unaware of their existence. Both objects are small, measuring no more than eight inches in length or height. The Blanton Museum acquired them in 1998 as part of the Suida-Manning Collection, but not much else is known about their provenance, or the history of ownership. What we do know, however, is that these works on paper have been linked to Renaissance artist and historian Giorgio Vasari (1511-74).

When I began my tenure as the Andrew W. Mellon Fellow in Prints and Drawings, and European Paintings at the Blanton this year, I was surprised to discover that these two works that have been attributed to Vasari – the subject of my doctoral dissertation – had never been written about by a previous scholar. Best known for his Lives of the Artists (1550 and 1568), a set of biographies of artists working mostly in Italy from the fourteenth- to sixteenth-centuries, Vasari was also a painter, an architect, and an avid collector. In his Libro de’ Disegni, or Book of Drawings, Vasari assembled drawings by his fellow Renaissance artists, cut and pasted them onto larger sheets of paper, and then drew decorative borders to frame and unify the drawings. Following his death, Vasari’s albums of drawings were broken up by subsequent owners and dispersed; many of the sheets were cut up, and Vasari’s collected drawings were resold. The only full sheet from Vasari’s Libro in the United States is at the National Gallery of Art in Washington, D.C; the other full sheets are scattered in various European collections. No scholar to date has been able to definitively reconstruct Vasari’s Libro. 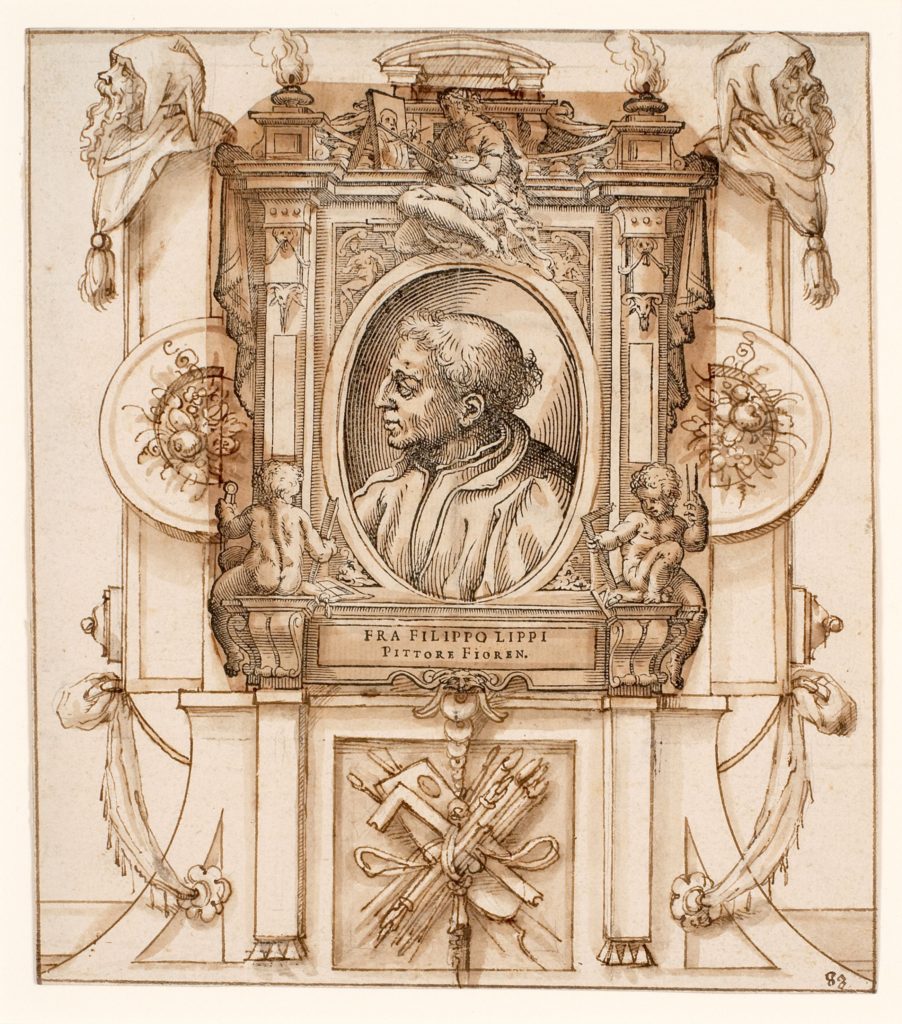 Giorgio Vasari, Decorative Border with the Portrait of Fra Filippo Lippi, from Il Libro de’ Disegni, after 1568, pen and ink, wash, and woodcut on paper mounted on paper, 8 7/8 x 6 7/8 in., Blanton Museum of Art, The University of Texas at Austin, The Suida-Manning Collection, 1999

The two works in the Blanton’s collection feature woodcut prints of Italian Renaissance artists Cosimo Rosselli (1439-1507) and Fra Filippo Lippi (c.1406-69) that have been meticulously cut from one sheet of paper and pasted onto another sheet. These works contain literal and figurative layers of history and prove the importance of object-based research for the art historian. In digital form, these works appear flat and cohesive, but in reality they are composite pieces of paper. On both the mounts and woodcuts, an artist – possibly Vasari – drew a fictive architectural framework with pen, adding wash and decorative motifs on both pieces of paper to seamlessly incorporate the woodcut portraits into a larger composition. Each work is therefore a blend of printmaking and draftsmanship. When considering the context of Vasari’s collection of drawings, these two Blanton works were likely part of larger sheets from the Libro, which presumably would have once united the woodcut portraits with drawings by Rosselli and Lippi, and which have since been cut up.

Giorgio Vasari, Decorative Border with the Portrait of Cosimo Rosselli, from Il Libro de’ Disegni, after 1568, pen and ink, blue and brown washes, and woodcut on paper mounted on paper, 8 7/8 x 6 7/8 in., Blanton Museum of Art, The University of Texas at Austin, The Suida-Manning Collection, 1999

Of the extant Libro pages, several of them are dedicated to a single artist, with a woodcut portrait of the artist pasted at the top and drawings by that artist below. I have been able to connect the Blanton works to nine Libro sheets that feature a similar woodcut portrait of an artist cut and pasted at the top of the page, surrounded by an inventive ornamental framework drawn in pen and ink that merges the woodcut with the collected drawings below. In their original construction, the portraits of Rosselli and Lippi likely were positioned in a similar fashion.

After I conducted extensive analyses of the technique and paper structure of the Blanton’s two works, including their stamps, collectors’ marks, and visual motifs, it was necessary to compare the Blanton works to others associated with Vasari’s Libro, particularly the ones with woodcut artists’ portraits. Through generous funding from the Mellon Foundation, I was able to visit collections in England and France to analyze other remaining sheets and fragments tied to Vasari’s collection. It was crucial that I see such works in person to examine the layers of pasted paper and overdrawing, as well as the dimensions and precise material qualities of the objects. Through this research I gathered fundamental information, including what was part of the original drawing and what was added later by collectors. Despite advancements in technology, photographs and digital reproductions fail to reveal crucial physical details like where one paper ends and another begins. Fragmentary works like these can be easy to dismiss when removed from their original context, but researching them can reveal substantial information about early collecting practices, Vasari himself, and the value subsequent owners attached to the Libro de’ Disegni. There is still much to discover, but the research I conducted as a curatorial fellow has shed light on the connection between the Blanton’s portraits of Rosselli and Lippi and Vasari’s Libro.

If you would like to see these works for yourself, the Julia Matthews Wilkinson Center for Prints and Drawings at the Blanton Museum of Art is open to the public by appointment through email at prints@blantonmuseum.org. Also be sure to drop by to see our monthly Pop-up Exhibitions that feature the Blanton’s broad collection of works on paper.

This post is authored by Allison Kim, a visiting assistant professor in art history at Skidmore College. She held the Blanton’s Andrew W. Mellon Fellowship in Prints and Drawings in the 2018 – 2019 academic year.