Women’s Suffrage at 100: A Commemoration and Exploration 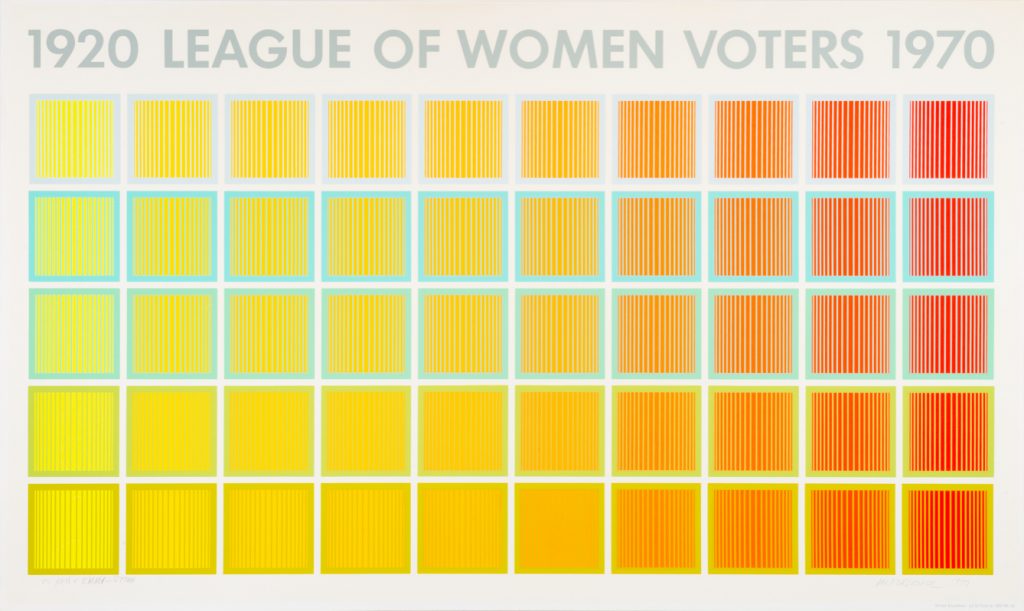 It is hard to mark exactly when and how to celebrate the 100th anniversary of women’s suffrage in the United States. The 19th Amendment, which prohibits the states and federal government from denying the right to vote on the basis of sex, was first passed in the US Senate on June 4, 1919. It took another fourteen months for the requisite thirty-six states to ratify the amendment. That threshold was crossed on August 18, 1920, and the amendment became part of the US Constitution on August 26, 1920—just in time to allow women to vote in the 1920 election.

These significant dates mark the admission of women into the voter rolls, but they do not tell a story of universal victory. None of these dates designate a time after which full enfranchisement was enjoyed by all US citizens. Native American women, many of whom were not citizens in 1920, but rather wards of the government, largely continued to lack access to the vote. So too did many Black women and men, with Jim Crow era laws legally disenfranchising entire populations. Native, Black, LGBTQ, Latinx, and Asian American suffragists make up just a few of the critical but historically overlooked voices in the women’s voting movement.

In honor of all the women and their allies who fought to expand the right to vote to all citizens, we would like to take this historic moment—the 100th anniversary of the 19th Amendment’s ratification—to commemorate the success of suffragists past and present, while also acknowledging how much more needs to be done. The work to achieve full enfranchisement is still of vital importance, as is the work to encourage civic participation. Five artworks drawn from the Blanton’s collection present some of the ways in which 20th-century artists have grappled with and celebrated voting in the US.

Women’s Work Is Never Done: Your Vote Has Power by Yolanda M. López 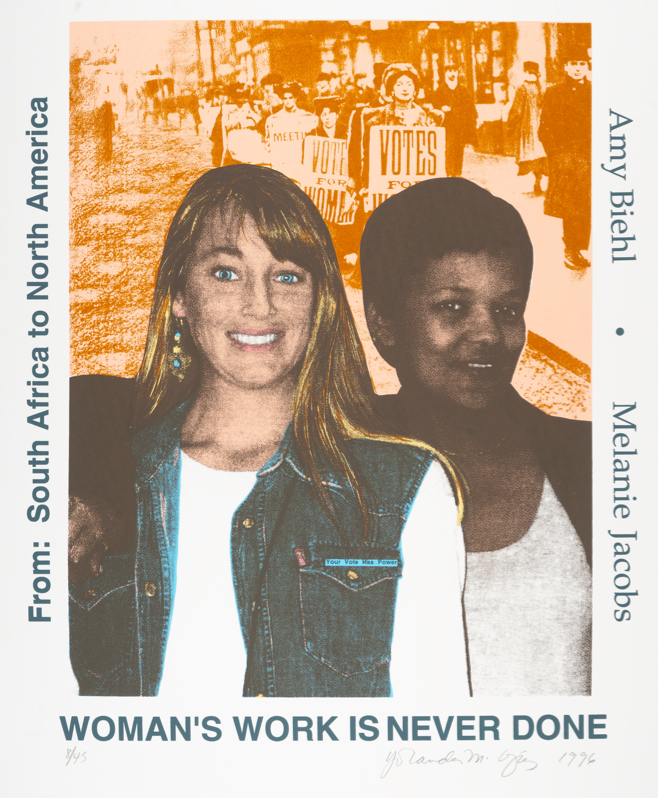 As a Chicana artist, Yolanda López places women’s and Latinx voices centerstage. Her work is often political and intersectional, addressing topics like immigration, civil rights, religion, family, and womanhood. In 1978, she designed a political poster with the words “Who’s the Illegal Alien, Pilgrim?” depicting an Aztec god crumbling immigration policies—a not-so-subtle reminder of who was here first. In her seminal work Guadalupe Tryptic (1978), López reimagines the Virgin de Guadalupe as three generations of women: her grandmother, her mother, and herself.

While working with Self Help Graphics & Art in East Los Angeles, López created Women’s Work Is Never Done: Your Vote Has Power (1996). Using photographic imagery, she demonstrates the power of women’s work in elections worldwide. This print incorporates a pink-hued silkscreen of 1930s suffragettes behind images of Amy Biehl and Melanie Jacobs. Biehl was an American activist who worked to promote South African voter education. In 1993, she was fatally attacked in a violent riot in Cape Town as the country worked to establish nonracial democracy. At Biehl’s memorial service, her roommate Jacobs stated, “I want to say to people that you have killed your own sister.” Made in 1996, right before the U.S. presidential election, this print highlights the complex history of voting rights while also encouraging civic action. López created the print as part of a series of similarly titled works that highlight the importance of voting, especially for women. Other artworks from the series focus on women farmworkers, domestic help, and Chicana mothers. 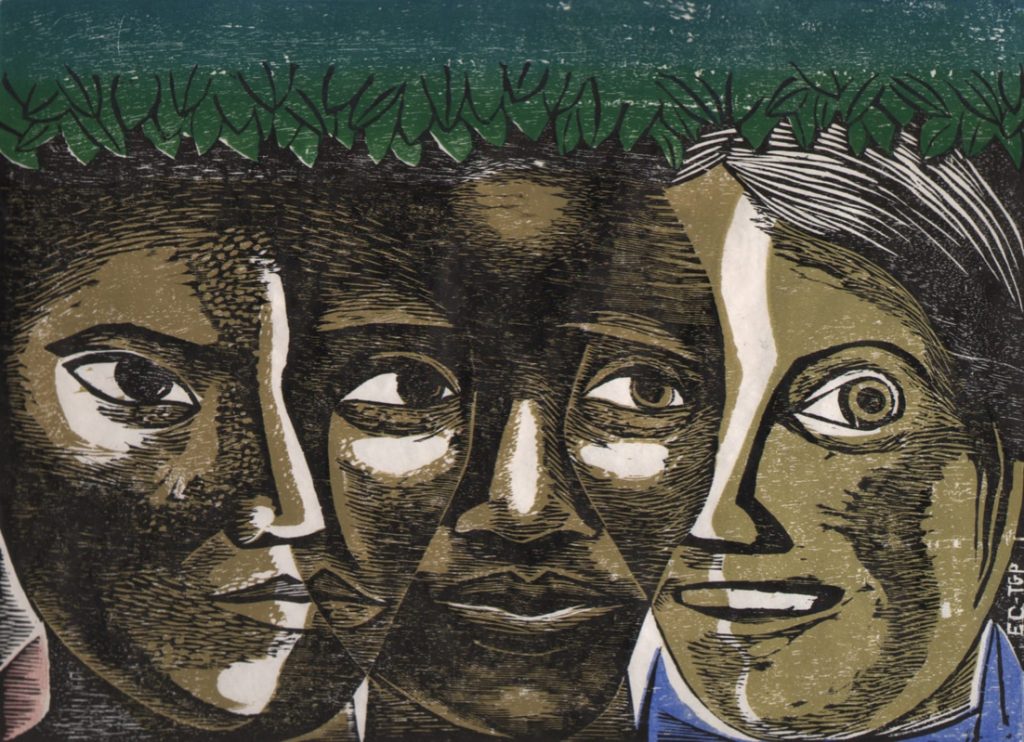 Elizabeth Catlett was born in Washington, D.C., a granddaughter of formerly enslaved people. Raised by her mother, Catlett studied art and philosophy at Howard University before enrolling in the MFA program at the University of Iowa. There she studied painting, sculpture, and printmaking, receiving particular encouragement from Grant Wood to test the possibilities of various media. Wood, best-known for his ode to Americana and resilience American Gothic (1930), was also an astute chronicler of landscape and everyday life via lithography. Catlett absorbed this training, and then used her own craft to create a lifelong body of work that was socially conscious, and spoke especially to race, gender, and the experiences of American and Mexican women.

After joining the Taller de Gráfica Popular (The People’s Print Workshop, known as TGP) in 1946, Catlett found a permanent home in Mexico City. There she taught at the National School of Fine Arts while continuing to produce art exploring themes of the maternal, of Black Power, and of contemporary activist figures. The print American Women Unite (Unidad de la Mujer Americana) embodies Catlett’s intersectional artistic spirit. Three women’s faces blend one into another, their skin tone varying, but their features shared. Their eyes, like their skin, are differentiated but mutual, as if declaring to the viewer that despite their individual experiences, these women share a united vision. Together, the women’s faces form a unit, a kind of female trinity. Across borders, across races, and across the carefully hewn lines of a woodblock, these female figures become one in their artistic composition, crowned by Nature herself.

Richard Anuszkiewicz investigated the intense optical effects that result from composing tight, repetitive patterns and juxtaposing vibrant, complementary colors. This interest among artists in the sixties came to be known as Op Art, or, Optical Art. Anuszkiewicz also studied the effect of light on color arranging in calculated, geometric compositions. He highlighted these techniques in his screenprint League of Women Voters: 1920-1970 (1970) created to commemorate the 50th anniversary of the 19th Amendment’s ratification. The artist celebrated this historic anniversary using his distinct abstract language. Here, five rows of ten patterned squares—each representing a year in the anniversary—change from bright yellow to crimson red. This evolution allows for each square to exhibit a different visual effect in their unique color relationship.

The 50th anniversary of the ratification of the 19th Amendment was a significant commemoration. The National Organization for Women (NOW) organized the Women’s Strike Day March, which took place on August 26, 1970. In over 90 major cities and towns, more than 10,000 women participated in demonstrations and rallies to call for equal employment and educational opportunities as well as accessible childcare. The following year, Congress officially made August 26th Women’s Equality Day.

A Votar [To Vote], from The New Immigration by Léo Limón 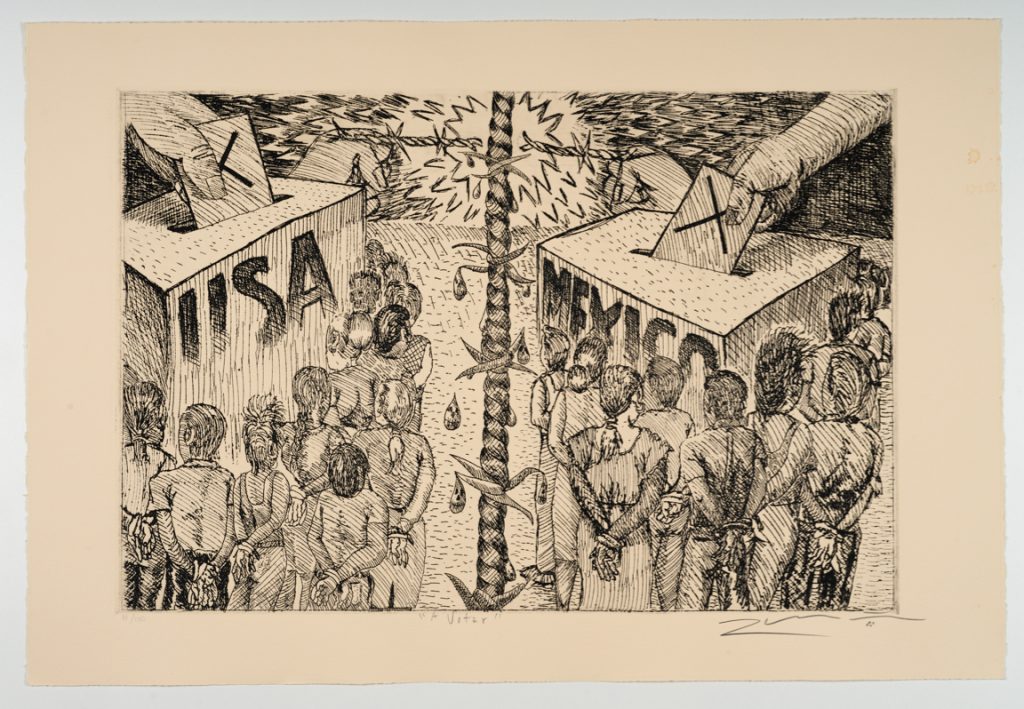 In 1988, Sister Karen Boccalero and Dr. Gilberto Cárdenas worked together to organize a portfolio of ten etchings by five artists. The prints, sponsored by Self Help Graphics and co-published by Galería Sin Fronteras, were produced at Taller Romero in Mexico City by the printer Renato Esquivel Romero. According to Cárdenas, this series pays “homage to the perseverance and dignity of the new Latino immigrants as they struggle with the transition into American society.” He has also said that they are a reminder of “the role that immigrants and their children will have in making American society a better community for tomorrow—a community ‘sin fronteras.'” Each of the five selected artists presents a distinctive take on politics, immigration, and the border.

In this etching by Léo Limón, titled A Votar [To Vote], the artist exposes political corruption and voter suppression in both Mexico and the United States. Down the middle of the composition is a barbed wire, a long-standing symbol for the two countries’ border. Droplets, which hang from the threatening barbs, have skull-like faces representing the many lives lost reaching the border. Meanwhile, throngs of people with hands tied behind their backs wait for their turn at the ballot box. Unable to make their own decision, large disembodied hands vote for these faceless individuals. Limón warns of invisible forces influencing elections and devaluing inalienable rights.

Selling Females by the Pound by Judy Chicago 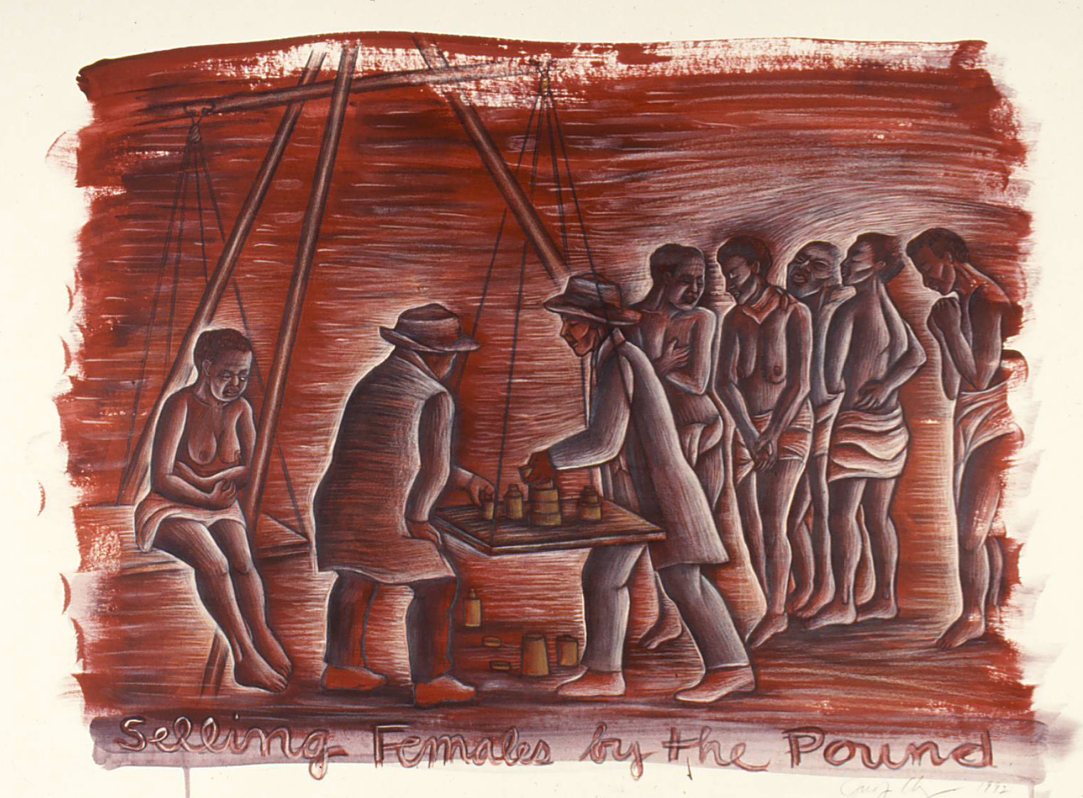 Among the pioneers of feminist art—as practice, and as teaching paradigm—stands Judy Chicago. Her confrontations with misogyny and calcified patriarchal structures in the art world led her, in part, to develop a radically frank form of artmaking in the late 1960s and 1970s. Her most famous installation, The Dinner Party (1974-1979), is a monumental, collaborative piece that celebrates women from across Western history through traditional female ‘crafts’ such as needlepoint and ceramics. Though works like this have at times been dismissed as kitsch (or, too obvious to be high art), Chicago has in fact used the assertive language of icons, text, and medium to tell narratives in forcibly accessible forms. Beyond the historical and contemporary neglect of women and their bodies, Chicago has also worked on projects dealing with such urgent and timeless themes as female fecundity, violent masculinity, mental illness, and the climate crisis.

This drawing is one of twelve studies for Arbeit Mache Frei/Work Makes Who Free? housed at the Blanton. They are part of another long-term work by Chicago, The Holocaust Project: From Darkness into Light (1985-93). The resulting works include a tapestry, twelve pictures, and three stained glass panels. These pieces do not only depict the horrors faced by Jews and other minorities at the hands of the Third Reich. Rather, Chicago weaves in other historical events of genocide and persecution. The scars of American history are especially present, with depictions of Native Americans and Black people being tortured, sold, and otherwise drained of their lifeblood. Scrawled across these raw visual accounts are titles like “Southern Chivalry” and “Work Makes You Dead.”

In the study “Selling Females by the Pound,” a Black woman, breasts exposed, is literally weighed against gold on a scale.  The haunting image recalls stories of enslaved women being forced to nurse white babies even as their own children were sold away, among other atrocities. For instance, Sojourner Truth, after freeing herself and her daughter Sophia, continued to face questions not only of her personhood but of her womanhood. In 1858, while giving an antislavery speech, Truth was heckled by white men who went so far as to demand that Truth reveal her breasts to prove she was not a man. Truth did so, declaring “that it was not to her shame that she uncovered her breast before them, but to their shame.” It is in this same speech that Truth famously said “I am a woman’s rights.” From Truth, to Chicago, to countless other women—including trans, femme, and queer folx—the march towards women’s rights continues.

Sign up to receive our monthly e-Newsletter to learn about new exhibitions, digital programs, and more.