What motivated the artist to make a work featuring the Ku Klux Klan?

For several years, the artist had been thinking about the persistence of the Klan in America. After a visit to the Blanton in 2015, where he saw the exhibition Witness: Art and Civil Rights in the Sixties, he was inspired by Philip Guston’s City Limits, a 1969 painting of cartoonish Klansmen. On his drive home, other important historical references came to mind, such as Gil Scott-Heron’s 1980 song, The Klan. That night, he began work on what would become The City. 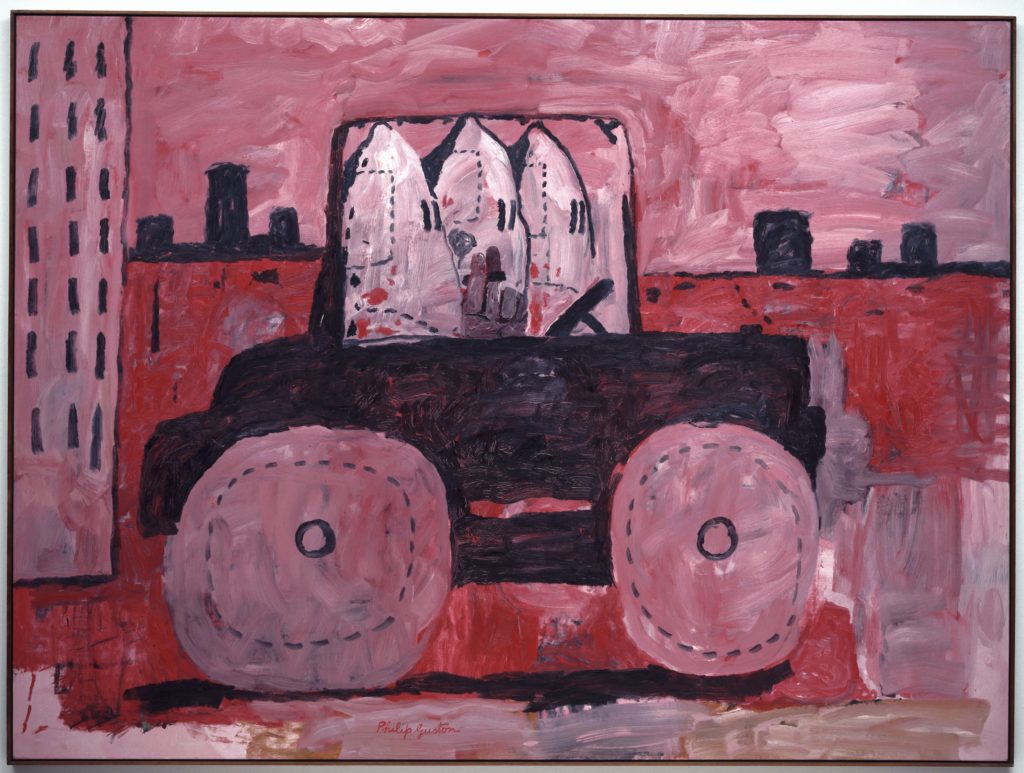 What attitudes towards the Ku Klux Klan does The City represent?

Valdez intended The City to be anti-racist. Valdez often quotes the American writer, Gore Vidal, “We are The United States of Amnesia. We learn nothing because we remember nothing.” Valdez says he made the painting to “impede social amnesia” about the continued presence of the Klan in this country. “I want to make that which often goes unseen, unnoticed, and not thought of, I want to make that apparent in the work.”

Do The City paintings represent a specific city?

No, but the title reveals how important the city is as a context for the paintings, underlining that racism is not just present in rural areas. The urban setting of the City paintings also suggests the physical components of structural racism. “The designs of many American cities today still reflect segregation,” explains Valdez.

Are the figures in The City I meant to represent specific people?

Valdez did not base the figures on specific individuals. However, he included specific details such as a college class ring, Nike sneakers, a smartphone, and a high-end vehicle to indicate that the Klan is not just on the fringes of American society. As he elaborates, “I [was] not interested in portraying another sinister portrait of the Klansmen. Instead, my intention was…to strip them of their disguises, without literally doing so. This was my opportunity to strip them of their power.”  It is also important to note that the gathering includes men, women, and a child.

What does  The  City II depict?

The City II  depicts a pile of old mattresses amidst discarded furniture and other trash. The artist painted the remnants of domestic spaces to serve as a reminder of the way that structural racism and inequality has impacted the design of American cities but also has embedded itself into individual lives and homes.

Valdez made The City II as a symbolic representation of The City I.

Why are The City paintings in a palette of grays?

Valdez used the black-and-white palette to invoke history and blur the line between the past and present, emphasizing that the Klan and racism continue to exist in the 21st century.

Are there other  City paintings?

There are no additional City paintings.

Who is Vincent Valdez?

Valdez’s work is included in numerous museum collections and has been exhibited nationally and internationally, including at the Los Angeles County Museum of Art; The Blanton Museum of Art; The Museum of Fine Arts, Houston; Snite Museum of Art at the University of Notre Dame; Parsons School of Design Museum, Paris; Fundación OSDE, Buenos Aires; among others. His work will also be featured in the exhibition  Suffering From Realness at MASS MoCA in spring 2019.

Has Valdez dealt with challenging subject matter in his work before?  Why take on these subjects?

Valdez’s art has always focused on social issues from his early social justice-themed murals in San Antonio, to his landmark painting Kill the Pachuco Bastard! in 2001 that depicts white violence against Latinos in 1940s Los Angeles, to the passing of his close friend and veteran of the Iraq war in the 2012 series Excerpts for John.

Most recently, he explored the lynching of Mexicans and Mexican-Americans in Texas during the late nineteenth and early twentieth centuries, which is the subject of two paintings from the Strangest Fruit series, which have been on view at the Blanton since 2015.

Have other artists of color depicted the KKK in art?

Yes, Camille Billops, Ernest Crichlow, Trenton Doyle Hancock, Michael Ray Charles, Norman Lewis, Paul Rucker, and numerous other artists of color have addressed the Klan in their work. As Valdez asks, “How many more American artists will need to tackle subjects like the Klan?”

How long did it take for Valdez to create The City paintings?

Eleven months. He began the work in October 2015 and completed it in September 2016.

Were these paintings a reaction to any specific  recent event?

No, the work was not made in response to any specific recent event. Valdez completed the paintings in September 2016, almost a year before the “Unite the Right” rally in Charlottesville, Virginia, in August 2017, for example.  He explains, “I was not considering current politics when I began this piece.  I had been harboring this vision for several years.  The image is 21st century America, but it also reveals all of the previous American centuries before it.”

Why did the Blanton acquire these works?

Veronica Roberts, Blanton Curator of Modern and Contemporary Art responds, “Vincent Valdez is a virtuosic painter who tackles some of the most challenging aspects of American identity and culture. As the author James Baldwin reminds us, “Not everything that is faced can be changed, but nothing can be changed until it is faced.” Whether it’s Baldwin’s writing or Pablo Picasso’s 1937 painting, Guernica, artists, writers, and musicians have been instrumental in helping us examine and better understand some of our most troubling societal problems for centuries.”