Race and Social Justice in Art

This exhibition metaphorically addressed the entrenched power hierarchies that influence how we see and experience the world. Employing a broad range of artistic mediums, Brooklyn, New York, artist Kambui Olujimi transforms familiar objects into lyrical, potent symbols. He asks us to consider what might be absent or obscured as much as what is present and tangible. By playing with notions of visibility, he poetically gestures toward the secretive mechanisms of authority.

Time, an invisible yet pervasive force, served as a unifying theme throughout this exhibition. “Zulu Time” is the phonetic phrase used by the military and civil aviation to refer to “Z-time,” itself an abbreviation for Universal Coordinated Time (formerly Greenwich Mean Time), the time at the prime meridian. Situated at longitude zero degrees, the prime meridian is the arbitrary line from which all global time zones are calculated. Since Great Britain was the world’s foremost maritime power when the concept of longitude originated, its starting point is based on the location of the British Naval Observatory in Greenwich. Thus, Olujimi reframed the notion of universal time as an imposition of power—a legacy of colonialism.

Collapsing past, present, and future, Olujimi referenced time as a means to investigate covert forces that shape and influence our lives. Starting with the origins of the universe, he then led us through the failures of modernism’s utopian endeavors, called attention to current socio-political crises of mass incarceration and immigration, and ultimately asked us to consider which systems of power will impact the space of tomorrow.

Major funding for the Blanton’s presentation is provided by Suzanne McFayden. 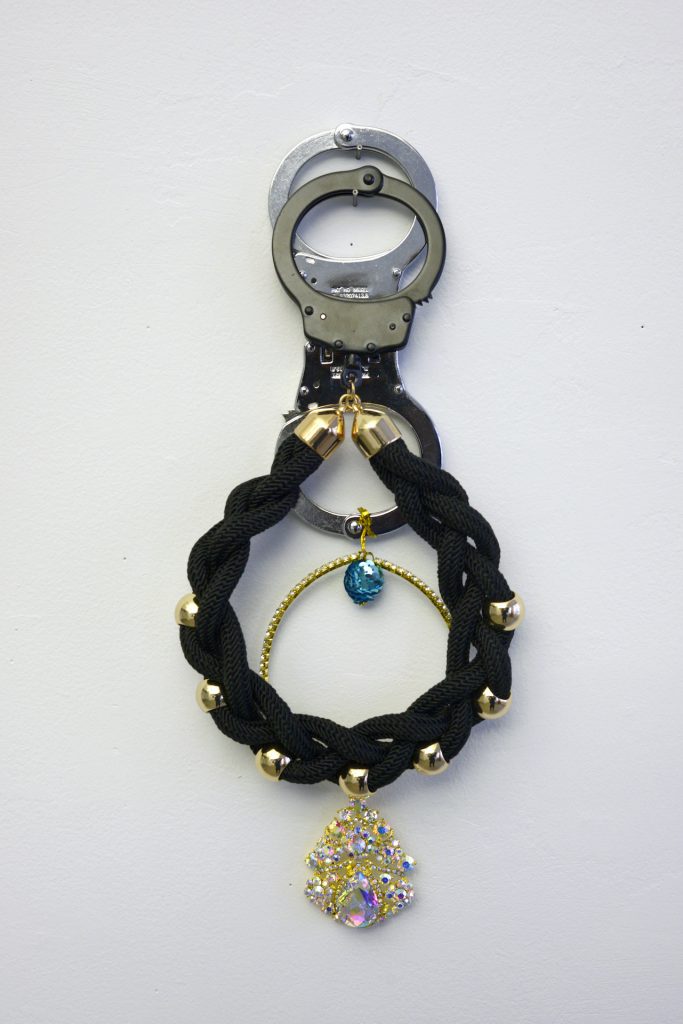 &nsbp
In this series of wall sculptures, the artist links handcuffs with ornamental strands of rhinestones and costume jewelry rather than chains. Absent physical bodies, Olujimi’s modified instruments could be mistaken for jewelry on display, commodities for purchase. Killing Time also points to another form of commodity—the commodification of human life through the economics of the criminal justice system of the United States, in which time is used to punish and control. Social critics have questioned the morality of private prisons, which profit from the punishment; publicly run prisons also engage in dubious financial practices, compelling inmates to provide free or woefully under-compensated labor to private companies. At the federal level, the Bureau of Prisons operates the “Federal Prison Industries,” a program that pays inmates roughly ninety cents an hour to produce everything from mattresses to body armor for other government agencies and which generated $500 million in sales in fiscal year 2016. As dazzling reminders of a system that enriches some through the forced imprisonment of others, the works in Killing Time suggest that our present approach to crime and punishment has effectively commodified human life.

Feature Image Credit: Installation of The Black That Birthed Us/Ville Radieuse, habite-à-machine (The Radiant City, the living machine), Mash Up #2, 2019, in Kambui Olujimi: Zulu Time at the Blanton Museum of Art, The University of Texas at Austin, January 26–July 14, 2019.