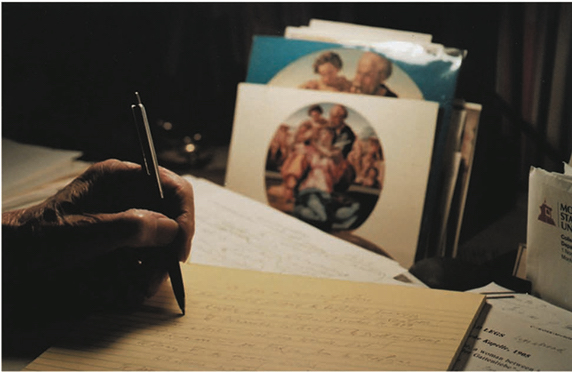 Acclaimed British artist Tacita Dean wasn't sure what she'd capture when she set out to photograph renowned art critic and collector Leo Steinberg at work. What transpired is quite the

Acclaimed British artist Tacita Dean wasn’t sure what she’d capture when she set out to photograph renowned art critic and collector Leo Steinberg at work. What transpired is quite the story, with the result on view as a photographic series in the Blanton’s exhibition, After Michelangelo, Past Picasso: Leo Steinberg’s Library of Prints. On Wednesday, April 21 at 12 noon CT, join curators Holly Borham and Carter Foster for a conversation with Dean about what inspired this art work, which visualizes Steinberg’s dictum, “the eye is part of the mind.”

✸Please note in a change to our normal Curated Conversation program timing, this event will take place at noon on Wednesday, April 21, 2021✸

Holly Borham is Associate Curator of Prints and Drawings at the Blanton Museum of Art, where she oversees the Julia Matthews Wilkinson Center for Prints and Drawings. At the Blanton, she curated Copies, Fakes, and Reproductions: Printmaking in the Renaissance, and coordinated the traveling exhibition, Medieval Monsters: Terrors, Aliens, Wonders. Her exhibition After Michelangelo, Past Picasso: Leo Steinberg’s Library of Prints, is on view at the Blanton from February 7 – May 9, 2021. She earned her PhD in Art and Archaeology from Princeton University, where she also interned at the Princeton University Art Museum.

Tacita Dean is a British European artist born in 1965 in Canterbury. She lives and works in Berlin and Los Angeles, where she was the Artist in Residence at the Getty Research Institute (2014/2015). Dean has been the recipient of numerous prizes including the Sixth Benesse Prize at the 51st Venice Biennale in 2005, the Hugo Boss Prize at the Solomon R. Guggenheim Museum, New York, in 2006 and the Kurt Schwitters Prize in 2009. In 2011, Dean produced the work FILM, as part of the Unilever Series of Tate Modern; the work shown in the Turbine Hall marked the beginning of their campaign to preserve photochemical film (www.savefilm.org). In 2019, Dean was commissioned to create the set design and costume for the Dante Project, a new collaborative production between Royal Ballet’s resident choreographer Wayne McGregor and conductor-composer Thomas Adès, set to premiere at the London Royal Opera House in 2021. Photography credit: Jim Rakete<

Carter E. Foster joined the Blanton in 2016 as Deputy Director for Curatorial Affairs and Curator of Prints and Drawings. He organized the exhibition Form into Spirit: Ellsworth Kelly’s Austin, to mark the opening of Kelly’s landmark building, and he co-authored the recent monograph on it published by Radius Books. He also organized Expanding Abstraction: Pushing the Boundaries of Painting in the Americas, 1958–1983  and co-organized Drawn: From the Collection of Jack Shear. Prior to the Blanton, he was a curator at the Whitney Museum of American Art for eleven years. He has written extensively about modern and contemporary art.