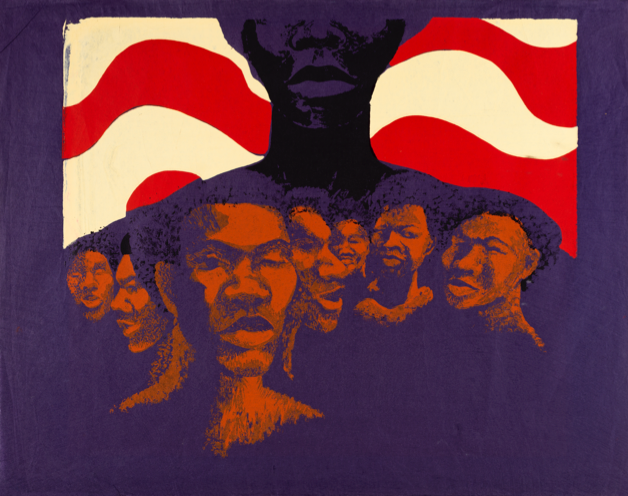 Flags are potent symbols designed to represent a nation’s identity. So what does it mean when a symbol of unity is not the same as a symbol of equality and

Flags are potent symbols designed to represent a nation’s identity. So what does it mean when a symbol of unity is not the same as a symbol of equality and justice for all? By incorporating flags into their work, artists raise urgent questions about national identity, and sometimes nationhood itself. Join Blanton curators Carter Foster, Vanessa Davidson, and Genevra Higginson as well as UT Austin doctoral candidate Phillip Townsend for a discussion of artworks that reinterpret, interrogate, and expand the narrative of national flags.

Enjoy our cocktail/mocktail suggestion for the week!

Carter E. Foster is Deputy Director for Curatorial Affairs and Curator of Prints and Drawings at the Blanton Museum of Art, the University of Texas at Austin. He previously held curatorial positions at the Whitney Museum of American Art, the Los Angeles County Museum of Art, and the Cleveland Museum of Art. He has written extensively on the history of drawing and contemporary drawing practice, as well as on the work of Edward Hopper and Ellsworth Kelly.

Genevra Higginson is the Curatorial Assistant for Prints and Drawings at the Blanton Museum of Art. She is a co-curator of the upcoming exhibition Off the Walls: Gifts from Professor John A. Robertson, and recently highlighted five women artists in the print collection for the museum’s blog. Prior to joining the Blanton, Genevra held positions at the Museum of Fine Arts, Boston, the Art Institute of Chicago, and the Museum of Contemporary Art, Chicago. Genevra earned her master’s degree in early modern print culture at the Courtauld Institute of Art, and her undergraduate degree in art history at the University of Virginia.

Phillip Townsend is a doctoral candidate at the University of Texas at Austin who focuses on Modern and Contemporary art of the Black Atlantic and specializes in the politics of identity. He earned his MA in Art History at UT-Austin and received his BA in Art History from the University of South Florida. As a founding member of the Austin-based curatorial collective, Neon Queen Collective, Phillip co-curated Notes on Sugar: The Work of María Magdalena Campos-Pons (2018) at the Christian Green Gallery and Like the Lonely Traveler: Video Works by María Magdalena Campos-Pons (2018) at the Visual Arts Center. Recently, Phillip co-curated Charles White: Celebrating the Gordon Gift (2019), an exhibition presented by the Blanton Museum in partnership with African and African Diaspora Studies (AADS) and the Art Galleries at Black Studies (AGBS) at The University of Texas at Austin. Phillip was also a contributor to the exhibition catalogue. He was formerly the Drs. Susan G. and Edmund W. Gordon Research Fellow in African American Art at the Blanton Museum.