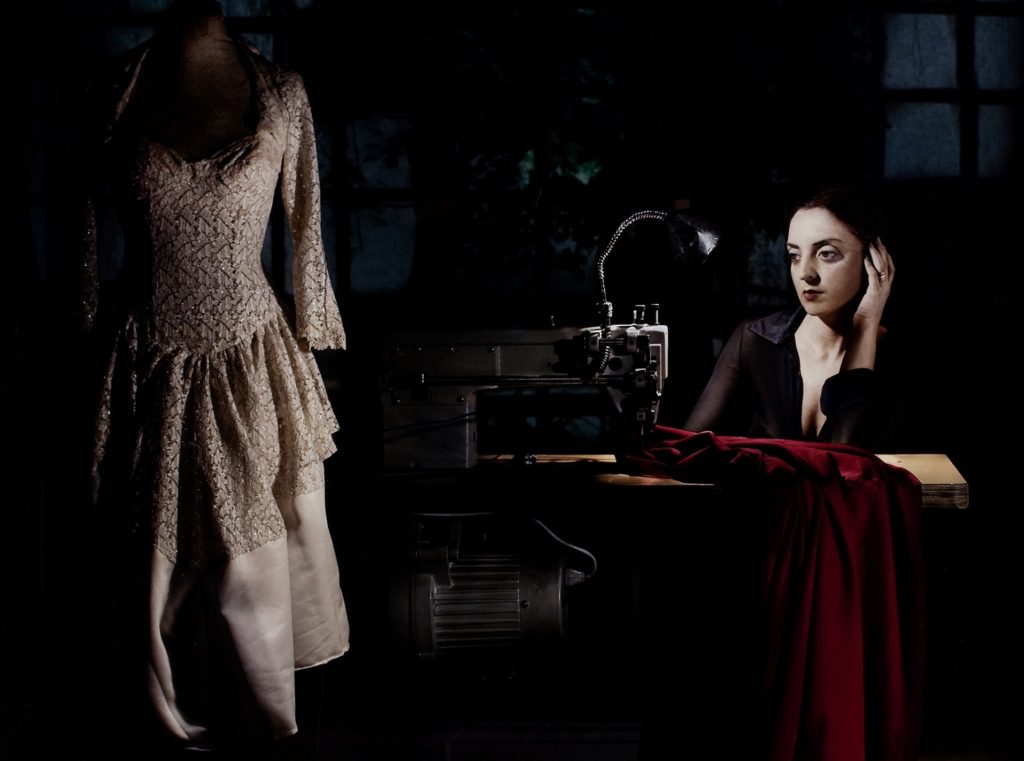 In 1987, Congress proclaimed the month of March as Women’s History Month, providing an official annual opportunity to celebrate the unsung contributions of women.  The National Museum of Women in the Arts in Washington D.C. lead a year-round mission to advocate women artists, providing a focus in March with their award-winning social media campaign #5WomenArtists.  The campaign objective is to raise awareness of women artists so that eventually everyone can name at least 5 women artists.

Check out these 5 women artists from our collection chosen by members of our Curatorial Team in support of the campaign.

Alice Neel was a straight, 70-year-old artist with white hair in a bun when she painted this portrait of a couple of well-known art critics in New York City. 1970 was the year of the first Gay Pride marches in New York, San Francisco, Los Angeles, and Chicago (to commemorate the one-year anniversary of the Stonewall riots.) I have always admired what a gutsy artist Neel was. And to think that she made many of her best works when she was in her seventies and eighties makes them all the more impressive and bold to me. (An art historian’s dream, Neel was born in 1900 so it’s easy to calculate her age!)

Putting the cultural significance of this painting aside for a moment, who wants to be painted hung over in red socks, with their legs splayed open, next to their dapperly dressed partner and soon-to-be ex? Neel tried to get Johnny Carson to pose for her. Can we entirely blame him for saying no? Working in a genre associated with flattery, she never made easy portraits and almost fifty years later, I am struck by how brave Neel’s portraits are. 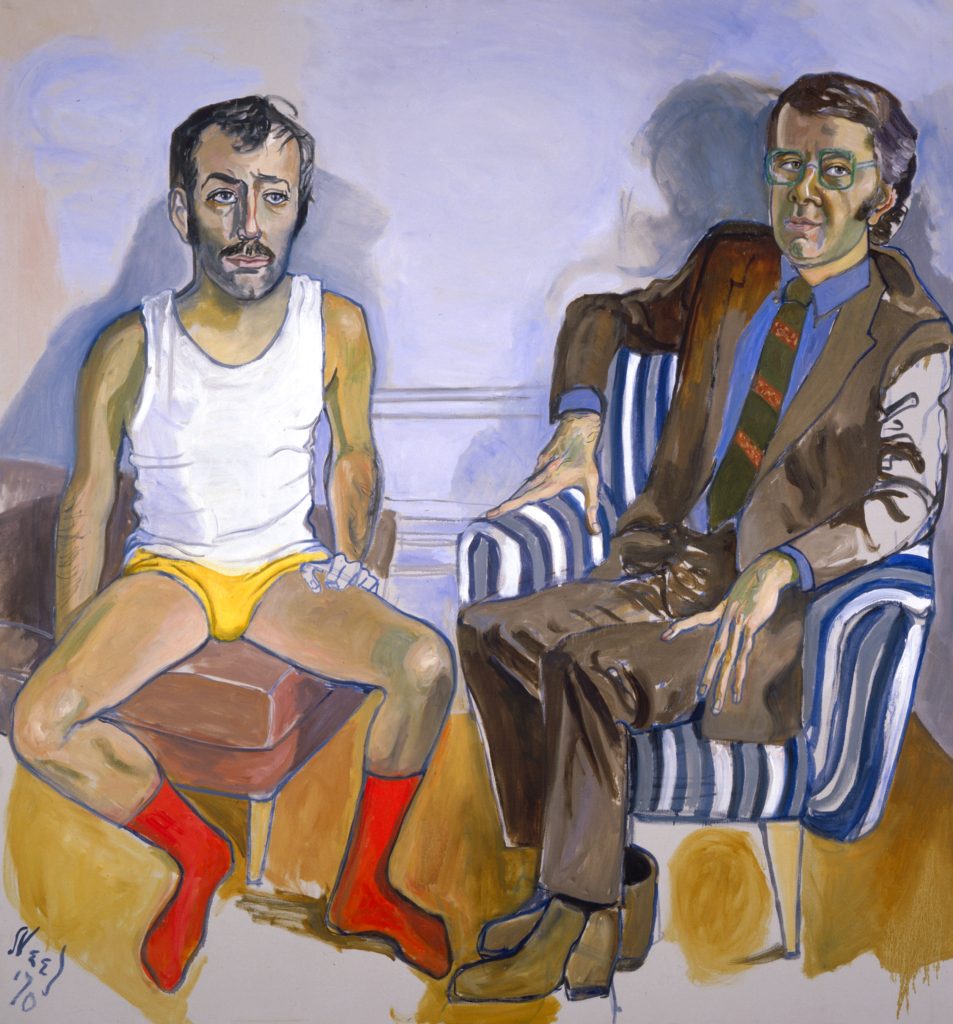 Since she emerged in the 1960s with her poured latex floor paintings, Lynda Benglis has shown that an intensive physical engagement with materials doesn’t have to be a macho exercise. “I feel that art is an intellectual process, which both questions and affirms the very nature of being,” she stated in 1971. “My concerns of identity within and outside the confines of my studio or working situation have everything to do with my experience. And my experience is primarily that of an artist and I am female.”

In works like Aqua Not #29, a cast-paper wall sculpture, Benglis challenges the limits of both artistic classifications and mediums. Aqua Not #29 hangs on the wall like a painting, but takes a sculptural form produced by pressing colored paper into a mold. In doing so, Benglis redefines paper as a source of color and dimensionality, rather than a flat medium for mark-making. 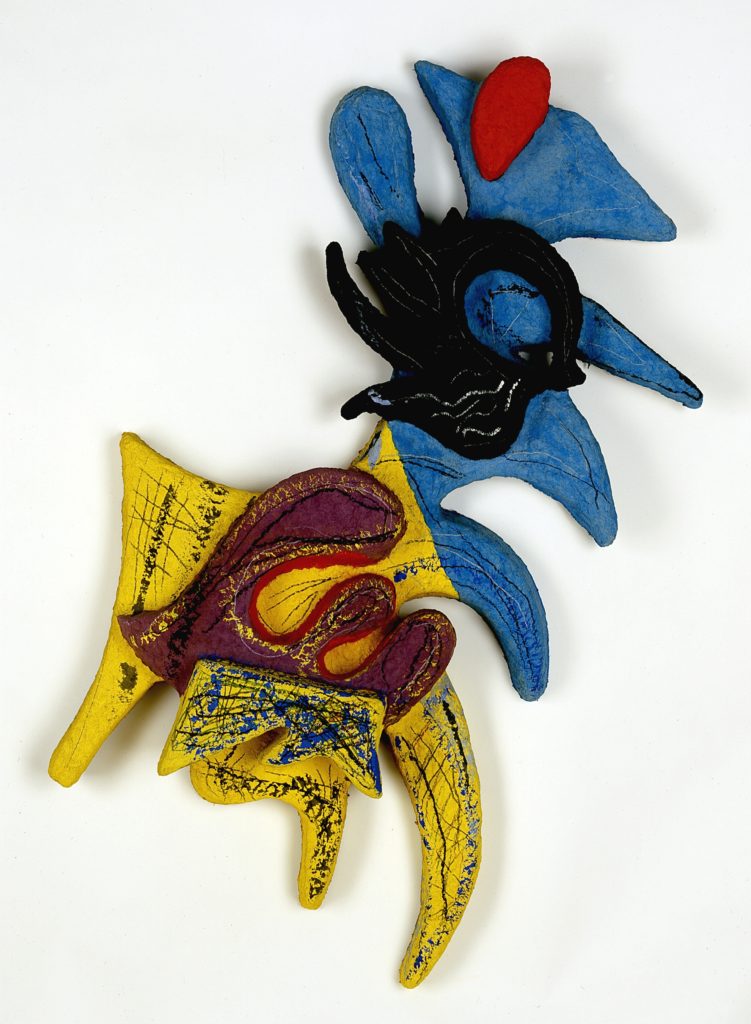 Lynda Benglis (Lake Charles, Louisiana, 1941 – )
Aqua Not #29, 1980
Cast pigmented paper and paint
134.6 cm x 127 cm x 12.7 cm (53 in. x 50 in. x 5 in.)
The Dorothy and Herbert Vogel Collection: Fifty Works for Fifty States, a joint initiative of the Trustees of the Dorothy and Herbert Vogel Collection and the National Gallery of Art, with generous support of the National Endowment for the Arts and the Institute of Museum and Library Services, 2008

Aimée Duvivier was among the few women artists selected to show their work at official exhibitions organized by the prestigious French Academy in the late eighteenth century. Like most painters of the time, she came from an artist/artisan family (her father was the director of the Savonnerie Manufactory—a manufactory of fine carpets in Paris). Duvivier’s specialty was portraiture. Women were limited in their choice of subject matter since they were not allowed to take life drawing classes which often involved nude models. In the Blanton’s portrait, the artist demonstrates her remarkable skills in representing not only the physical features of the sitter but also the details of textiles. 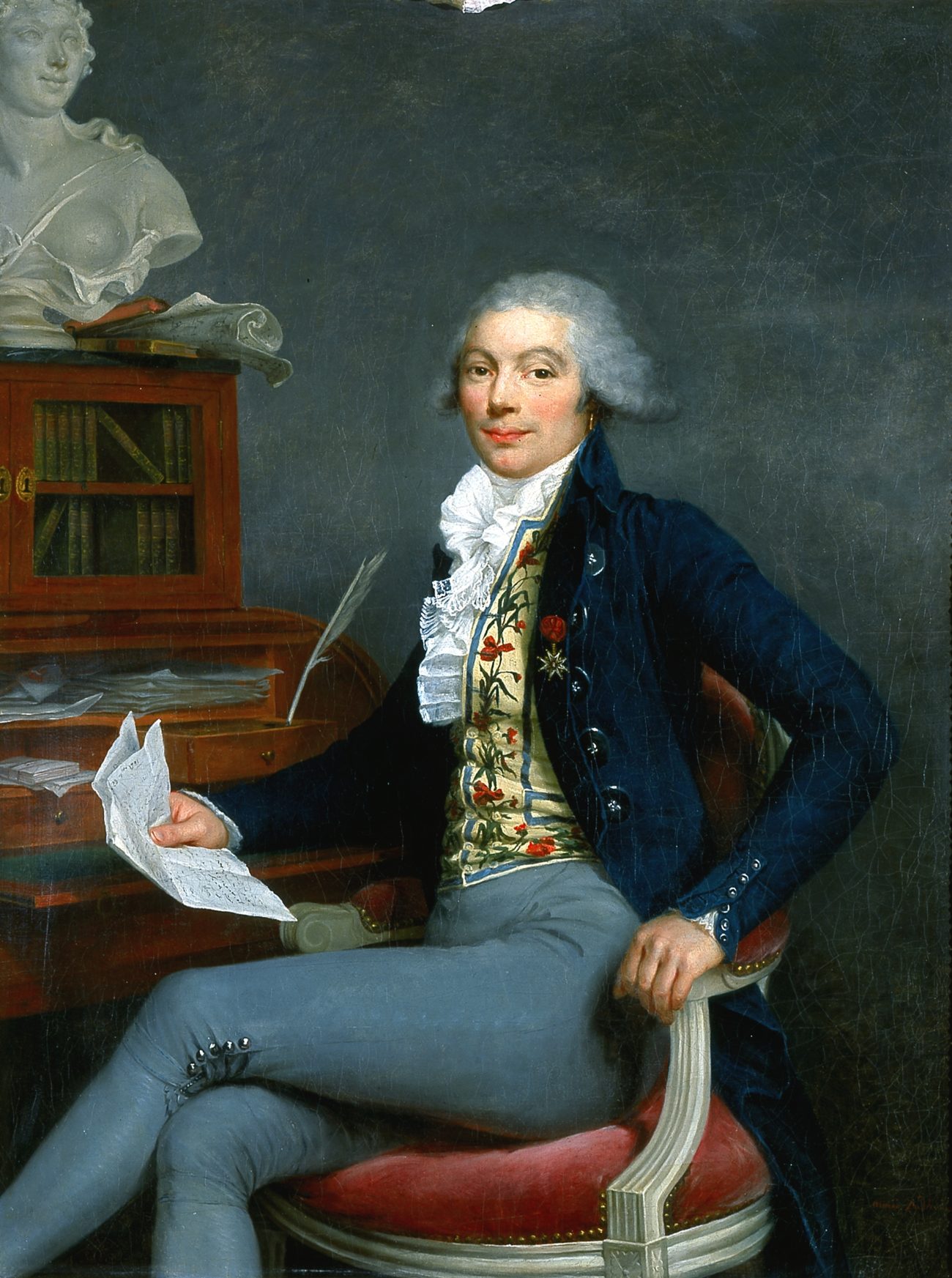 Trained by her father, a skilled engraver at the Mantuan court, Diana Scultori (also known as Diana Mantuana) was the first female printmaker to sign her name to her work.  In his Lives of the Artists, Giorgio Vasari wrote, “when I saw her, a very well-bred and charming young lady, and her works, which are most beautiful, I was stunned.”  Scultori’s privileged position at court gave her access to the drawings of other famous artists, such as Giulio Romano.  After her marriage to the architect Francesco da Volterra, Diana moved to Rome, where she applied for and received a papal privilege, essentially a copyright to make and market her own prints.  Her skill in engraving was matched by her skills in self-promotion; many of Diana’s engravings included extensive dedicatory inscriptions to prominent potential patrons, which made visible her connections to elites in Rome and Tuscany. This engraving after a design by Romano depicts the birth of the Zeus and Latona’s twins, Apollo and Diana, on the island of Delos, far away from the jealous eyes of Zeus’s wife, Hera. 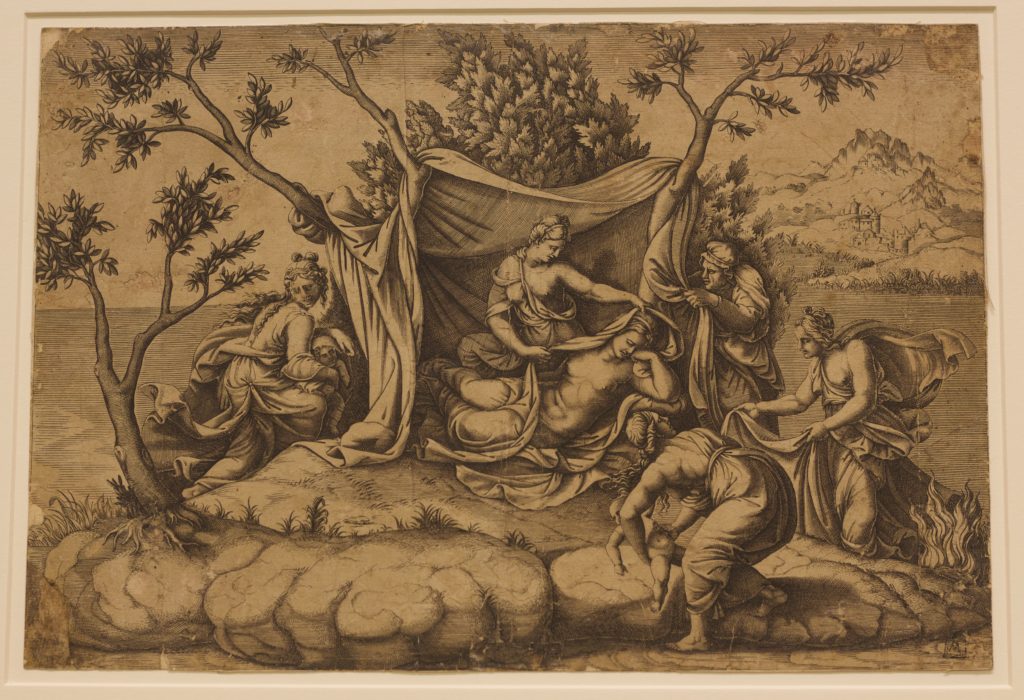 At an early age, Nicola Constantino discovered the works of a fellow native of Rosario, Argentina, the painter Antonio Berni. She was inspired by Berni’s paintings, including Ramona Costurera [Ramona the Seamstress] of 1963. In 2008, Constantino cleverly recreated that work in a photograph titled Nicola Costurera [Nicola the Seamstress], placing herself as the primary subject in the re-enactment of an iconic composition. In this piece, Nicola the artist explores ideas of womanhood, oppression, work, and life. In a darkened room, enclosed by a wall of windows in the background, we see the small lamp of a sewing machine shine on Nicola. With a facial expression that displays unfulfilment, the costurera contemplates a white dress while resting her head on her left hand. With a red dress in front of her, the artist seems torn between two opposing models of womanhood – one associated with sexuality and one with purity. 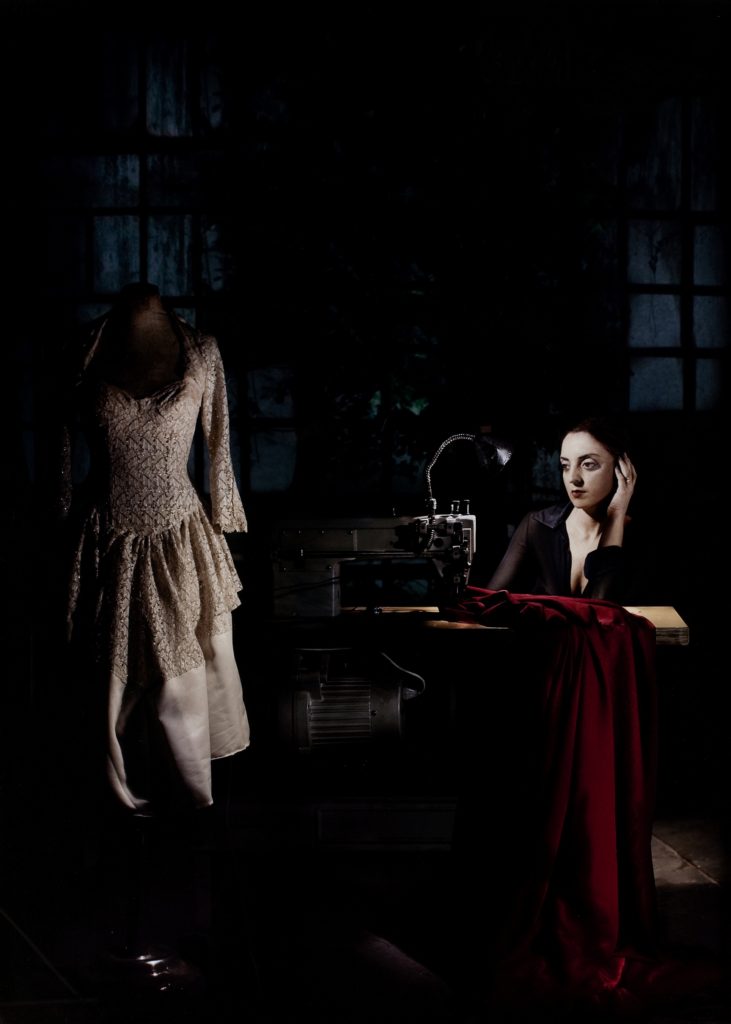