A Q&A With Artist
Lenka Clayton 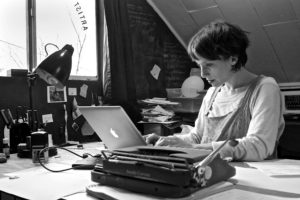 In The Distance I Can Be From My Son, Lenka Clayton attempted to objectively measure the furthest distance she could be from her toddler son in three environments: a city park, the alley behind their Pittsburgh home, and in the aisles of a local supermarket. For this trio of videos—on view in the Film & Video Gallery at the Blanton June 2 through September 2, 2018, and organized by Blanton Curator Veronica Roberts—Clayton humorously explores how much autonomy parents must decide to give their children. Nearby, a selection of Clayton’s Typewriter Drawings are on view, in which she uses apostrophes, asterisks, en-dashes, and paper turning to create a variety of images.

Clayton produced these videos and Typewriter Drawings as part of a larger project, An Artist Residency in Motherhood, a grant-funded residency she created out of her own home to explore the intersection of parenthood and art. 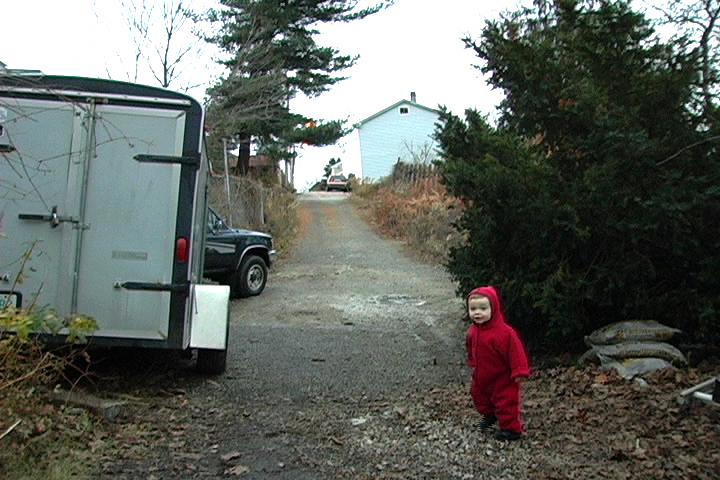 Lenka Clayton
The Distance I Can Be from My Son, 2013 (still)
Single channel video, 4:35 minutes
Blanton Museum of Art, The University of Texas at Austin, Gift of Lora Reynolds and Quincy Lee

Once I became a mother I learned the benefit of limitations to my creative practice and thinking. Before I had kids, I had a lot of free time and a studio, yet I would often procrastinate. Once I had kids, that relationship completely changed, I found that any minute that I had, I was desperate to work. This was an incredibly valuable and liberating lesson and surprisingly I became much more prolific in the time I worked than before I had kids.

Additionally, I noticed that although I was physically staying very still – I was at home a lot and not traveling in the way that I used to – my reality was changing dramatically every day as my child developed and grew. That’s what it’s like to go on a residency, you go to a completely new place and get swept away by the newness and the excitement of that place. I realized that that same newness and excitement was happening in my home, I just needed to reframe it in order to be able to see it more clearly.  That was a moment where I realized that parenthood is such a valuable site to work in.

What common experiences of parenthood are represented in The Distance I Can Be From My Son?

An Artist Residency in Motherhood gave me the opportunity to put a framework around the things I was experiencing in my everyday life as a mother in order to translate them into my artistic practice. The Distance I Can Be From My Son is one example. My son was at that age where as soon as I would let go of him he would run as far away as possible from me. The only difference in the video is that I had a camera set up and when I let go of him for once, I didn’t immediately run after him. I waited and he just ran and ran and ran. I set myself the task to not run after him until I felt absolutely unable not to.

What does this work say about the emotions a mother feels towards her child?

I was testing the boundaries that I’m sure every parent feels: the very specific boundary where you can be okay with something and then, very suddenly, not okay. It was really interesting to me that there was a very definite point between safety and un-safeness. Before I filmed The Distance I Can Be From My Son, I didn’t know what that point was, so I set out to objectively measure that emotional distance. 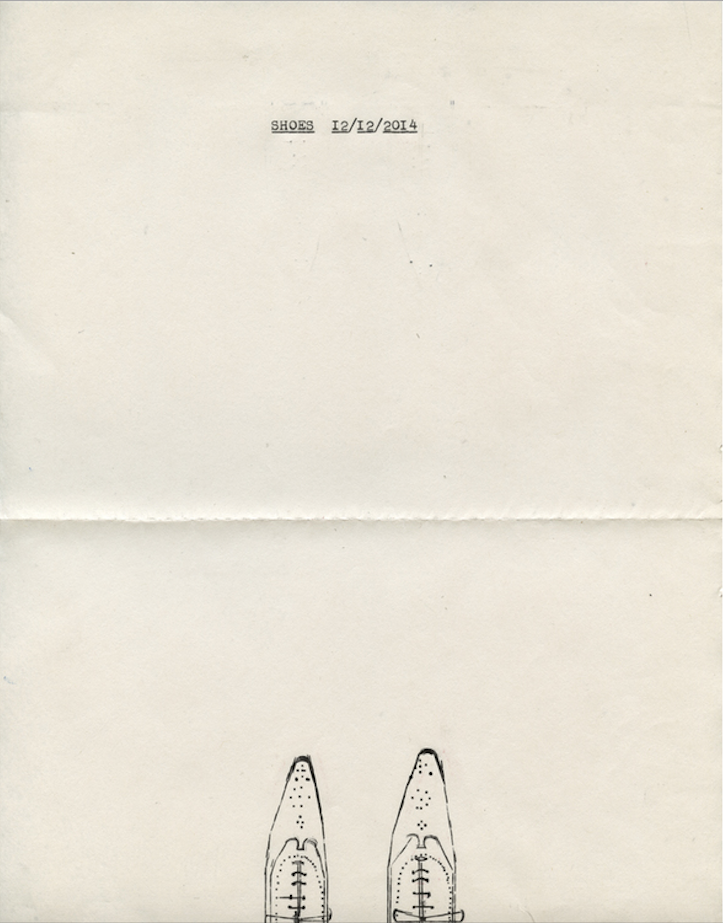 At what point did you recognize the need to expand the idea of An Artist Residency in Motherhood beyond your own practice?

During the three years I was the world’s first Artist in Residence in Motherhood, I created 32 new works. The Distance I Can Be From My Son was one of them. I published them on a website, which got a lot of attention from mothers who were also working as artists. When motherhood changed as my children aged, I started to think about how I could pass the residency on to others.

It was very difficult to work out how to share because, essentially, it’s just a mental shift. It’s not a location or a particular schedule. It’s a proposal to look at the things that are making working as an artist difficult and transform them mentally into something to work with. The main tool on the website is a questionnaire that people fill in for themselves, that once completed creates a bespoke structure for their residency. An important thing I stress is that the residency is not my project that people are taking part in, but rather a structure that they create for themselves. They’re doing their own residency in motherhood, which is completely defined by their situation, needs, and specific practice.

Did you expect the idea to resonate so strongly with artists who are mothers as widely as it did?

On Mother’s Day in 2016, I published the website and wrote one Facebook post about it. In the first few weeks, around 40,000 people visited it. It was really shocking, touching, and thrilling to me. I had come up with it specifically because support and visibility for parents is particularly awful in the US, so I imagined that it could resonate with people in this country. However, it reached much farther than the US. Currently, there are residents in 38 countries, including extremely socially progressive places that have a lot of support for parents, like Sweden. The reach is more significant than just the physical support; it speaks to the shared struggle of balancing two full-time careers—parenthood and working as an artist—at the same time. 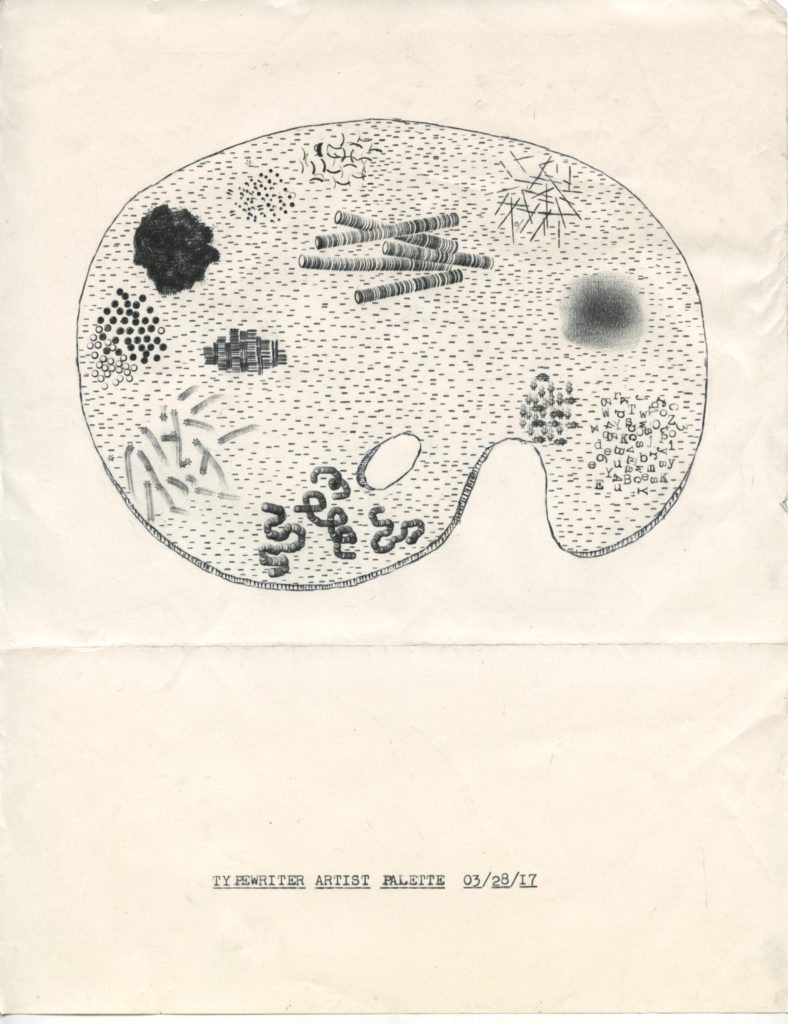 Part of the reason you created An Artist Residency in Motherhood is that many artist residencies, which are often an important part of an artistic career, do not accommodate children and families. What do you think this says about navigating the art world as a mother, or as a parent?

Before I had kids, going on residencies was a major way I would fund my work, find inspiration, and follow opportunities. I was really shocked to look for residencies and realize there were almost no accommodations for me to participate in as someone who had a child and a family. After I had my first child in 2011, I looked for role models or support, but didn’t find anything much. At the time, there was so little visibility for the topic, especially within the sphere of the contemporary art world. I kept coming back to Mary Kelly’s Post-Partum Document released in 1983. I couldn’t believe that her work was the most recent well-known example of motherhood in art.

I’m absolutely not advocating that motherhood has to be a subject for any mother who is an artist, but that the particular struggles and challenges of these two roles are potentially reframed as creative fuel for working. An Artist Residency in Motherhood is a movement to visibly be an engaged, serious artist and an engaged, serious parent, rather than being forced to choose one over the other.

Why do you think residencies don’t accommodate families? Is this changing?

A very common contemporary model for an artist is an individual person who is free to travel at the drop of a hat. This shuts out all kinds of people including artists with regular jobs, and parents, particularly mothers. One expectation for residencies is that you are taken away from the boring routines of everyday life to find inspiration in having no responsibilities. For me, that’s completely unsustainable because that’s not real life. I don’t want to work in a bubble; I want to work out of my direct experience.

The situation for residencies and families is definitely changing now. For example, The Sustainable Arts Foundation in San Francisco sets up grants that support individual parent artists as well as grants that enable residencies to become more accessible to artists with families. There are people and organizations who are working very hard to broaden the narrow definitions of who gets support to work as an artist. I’m thrilled to see the landscape changing and very happy that An Artist Residency in Motherhood is a small part of it.

Lenka Clayton (b. 1977, Cornwall, England) is based in Pittsburgh, Pennsylvania and is represented by Catharine Clark Gallery in San Francisco.  The Distance I Can Be from My Son is on view at the Blanton through September 2, 2018.