Music for Museums: Brent Baldwin on curating Beat the Rush at the Blanton

Brent Baldwin is a composer, conductor, vocalist, guitarist, and the artistic director of Panoramic Voices. He’s collaborated with everyone from Austin Symphony Orchestra to M. Ward, from Pulitzer Prize-winning composers Shulamit Ran and Caroline Shaw to Peter Buck and …And You Will Know Us By the Trail of Dead. He’s currently curating the Blanton’s music series Beat the Rush, a series of concerts every Third Thursday at 5:30 p.m., focusing on the intersection of music and visual art. I chatted with Brent this week about his experience working at the Blanton and what we can expect from his upcoming shows.

You’re producing shows in an art museum—where’s the most unusual venue where you’ve ever performed or produced a show?

Well, for a long time I’ve been doing classical shows in bars, and warehouses, and places that used to be thought of as more off-the-beaten-path. But now those shows are seeming more common, less unusual. But one venue that comes to mind was in Italy. The Roman Communist Party hired my band to play its festival in the middle of the city, within walking distance of the Coliseum.

Were politicians making speeches from the stage, or giving you scripts to read?
No, not at all! Ironically there was a lot of merchandise being sold at an official event of the communist party, but being good communists, they were willing to share their t-shirts and posters with us for free. They warned us—this was right after Berlusconi came into power, “You can wear these t-shirts in the festival zone, but you might get assaulted if you wear them into the city.” But it was a totally fun experience. Everything smelled like Amsterdam, but in Rome.

Tell me about a favorite work of art.
I’m thinking of a couple of pieces: I used to have a print of this Willem de Kooning self-portrait on my wall. It’s got a certain beauty and ugliness that coexisted intensely. There’s an inherent dynamic beauty to it, and yet at the same time it really creeps you out! Another one is—when I was a young artist growing up in Maine studying art, I was studying Wyeth’s Christina’s World. And there’s such a psychodrama happening in that painting with this pastoral beauty juxtaposed with this disabled woman lying on the ground. And of course it’s a super well-known artwork but the Wyeths actually lived in our neighborhood. My dad used to work on their wells and do other work for the Wyeths. We didn’t realize how famous he was—we just knew him as Andy. And then later on, you visit the Museum of Modern Art in New York and you realize that this work that you had always thought of as a painting by your neighbors in small-town Maine is one of the icons of American painting.

Who’s a musician whose visual style you admire?
Back in high school I was really drawn to the cover of the album Black Sabbath by Black Sabbath. I didn’t even know what the band sounded like, but I knew I had to buy it. Same thing with Joy Division and Bauhaus and so many post-punk albums who were influenced by Bowie. When I first heard Joy Division’s music I thought, Oh, perfect, this band sounds like the album cover. It’s really quite difficult to align those things, the visual and the actual sound, and not many bands do it well! 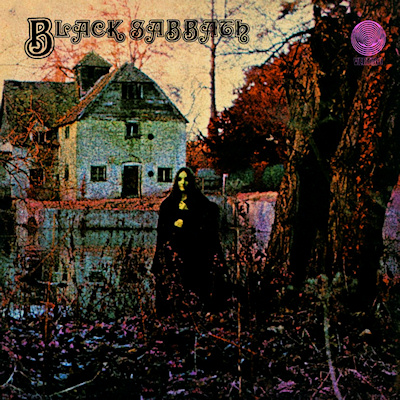 So now I’m trying to think of bands that don’t sound like the album cover!
Well I think Sgt Pepper is a really good match, but maybe the Beatles’ earlier albums, not so much. Please Please Me and Meet the Beatles look a lot more like generic pop bands, and musically they were not at all generic!

I remember there was that Beatles album with the cut-up doll parts and raw meat, and then the label immediately pulled it!

Oh yeah, and then they replaced it with some generic picture of them all wearing sweaters. The Beatles’ name also seemed mismatched for their music. Or the Grateful Dead, that’s another example: when I heard their name I thought, Dude, that’s the name of a band that should be opening for Black Sabbath. But then I bought it and I was really confused. 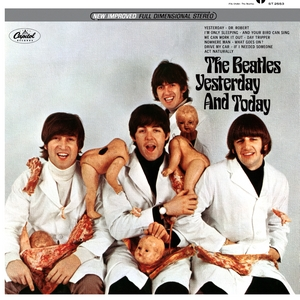 Yeah, I always thought the name They Might Be Giants sounded like a death metal band, which is 180 degrees different from their actual sound.

Right, but that is truly one of the best band names. I wish I’d come up with that name.

So how long have you been in charge of the Panoramic Voices holiday concerts?

Well, I became the artistic director in 2008, and I told them in the interview that I really liked to do more offbeat things than what the ensemble had typically performed. But they hired me anyway, and so one of the first ideas I had was to do a new sort of December concert—not just a nice program of nice pieces that nice people will come to, but one that could be more unique that folks aren’t going to encounter in other concert halls in December. My friend Josh from the Invincible Czars and I decided that we should do our extravaganza together in 2014. The really interesting part of our collaborative show is the ability to be traditional and innovative, to rework holiday songs in the style of Iron Maiden or AC/DC. So it’s still a fun show that people can sing along to, but it’s challenging for us and for audiences.

It’s more typical for musical directors to do the same sort of works every year: The Nutcracker, Handel’s Messiah. But it’s more fulfilling for me to do shows that can uplift the audience’s feelings even if people don’t celebrate Christmas or practice a specific religious faith.

And not only to do a holiday show for the religious and the nonreligious, but to do a show for people who are experiencing darker times in their lives. It’s really important to remember that the suicide rate goes up at the holiday time. There’s darkness in the holiday season—the first part of The Grinch or the first part of It’s a Wonderful Life. It’s sort of like how post-love songs can be more compelling than love songs.

It’s like we’re not being honest if we don’t recognize that this is a dark time of year for many people. So for us it’s about doing an honest and balanced show that recognizes that not everyone is happy and celebrating right now.

So why should people come out to your Beat the Rush shows in January and February?

The January show is going to be interesting: it’s the Keep Composers Weird impresario Nathan Felix, who has an international cast of young composers from Australia, Nicaragua, and the US—some very approachable new works that are exciting, works that give us a chance to listen to some future stars of contemporary music.

And in February, we’ll be presenting a brand new work by Travis Weller in conjunction with New Music Coop and Panoramic Voices. There’s so much beauty in the texture that Travis uses, these ethereal textures that morph from beauty into more mysterious tones—he’s a real Austin treasure. He’s so consistently good and yet he’s always reinventing himself. Lately he’s been interested in pieces that use clocks to signal to different musicians when they should shift to a different soundscape—in a way that lets the piece’s sound change slowly over time.

Other than everyone you’ve scheduled at the Blanton during your run as curator, if you could bring anyone to the Blanton for a 45-minute set, living or dead, who would it be?

We’ve lost so much in 2016. I remember at the beginning of the year I wrote and performed, with Convergence, a tribute to Lemmy from Motorhead and Oliver Sacks. And of course very early in the year David Bowie passed—he would have been great to have at Beat the Rush. But I wouldn’t have asked him to play Ziggy Stardust; I would have asked him to sit there in a chair in the Blanton and read Strindberg monologues or do interpretive dance or something else that was completely different from his pop music.

Oh, of course. He’d have loved that. I would love to book some sort of impossible supergroup, like, Iggy Pop on vocals, Squarepusher on bass, Mozart on harpsichord.

Have you heard the newest Squarepusher? So, so good.

What are you working on besides Beat the Rush in 2017?

A third installment of our annual Indie Orchestra Night, later in the spring. Unfortunately I can’t yet confirm who’s going to be here, but it will be a great show. Panoramic Voices is also doing a show featuring a brand new work by Joel Love paired with Bach’s B minor mass. And then aside from Panoramic Voices, I’m producing some albums and I’m orchestrating for Jonathan Meiburg of Shearwater.

Don’t miss our music doubleheader next Thursday, December 15 at 5:30, featuring Conspirare’s Big Sing, followed by the Invincible Czars and Panoramic Voices at 7:00!