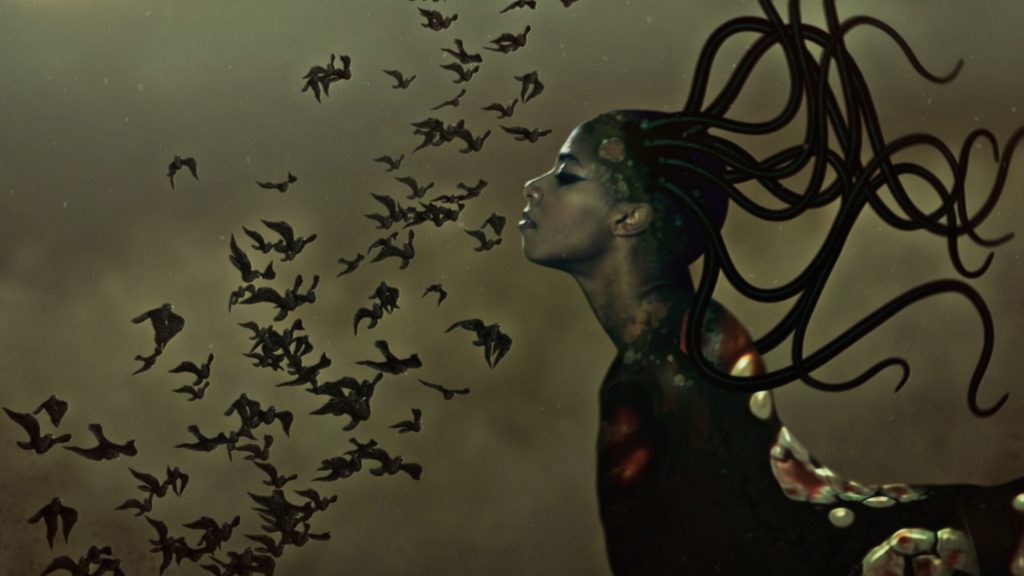 The partnership between artist and musician is always a fascinating relationship to observe, especially when the results become iconic album covers, astounding museum exhibitions, and monumental musical performances.

In celebration of the opening of Wangechi Mutu’s The End of eating Everything featuring singer/producer Santigold, check out five other fantastic collaborations that have resulted in these inspiring projects.

Takashi Murakami LOVES to collaborate with musicians, teaming up with artists including Billie Eilish and Kanye West.  Takashi worked with Pharrell to create a sculpture encrusted with 26,000 diamonds and gems titled “The Simple Things,” 2008-9, to help illustrate the metaphor of value and what it means to us personally. It was exhibited at Art Basel in 2009.

Australian artist Lynette Wallworth invited Antony Hegarty (ANOHNI) on a ten-day trip to meet the Martu population of the Parnngurr community in Western Australia Pilbara region. From this experience, Wallworth directed a video that shared this cross-cultural exchange, having lived and worked with the Martu artists, helping share their story to the world.

As well as being one of the coolest bands EVER, Blondie upped their cool factor yet again by featuring prolific New York artist Jean-Michel Basquiat AND graffiti artist Lee Quinones in their 1981 music video. We’re literally in “Rapture.”

Mickalene Thomas examines the popular characterization of black female identity, celebrity, and sexuality through the art she creates.  Both Solange Knowles and her mother Tina Knowles were already collecting her work and contacted Thomas to create a limited edition album cover for Solange’s EP “True.”

Keith Haring not only featured alongside Andy Warhol in this bold 1986 Grace Jones video, but also used Grace’s body as a canvas during an eighteen-hour marathon body-painting session. It doesn’t get much more epic than that!

The End of eating Everything by Wangechi Mutu is on view through November 25th 2018 and is shown in conjunction with the exhibition Making Africa: A Continent of Contemporary Design, on view in our Butler Gallery from October 14, 2018 through January 06, 2019.