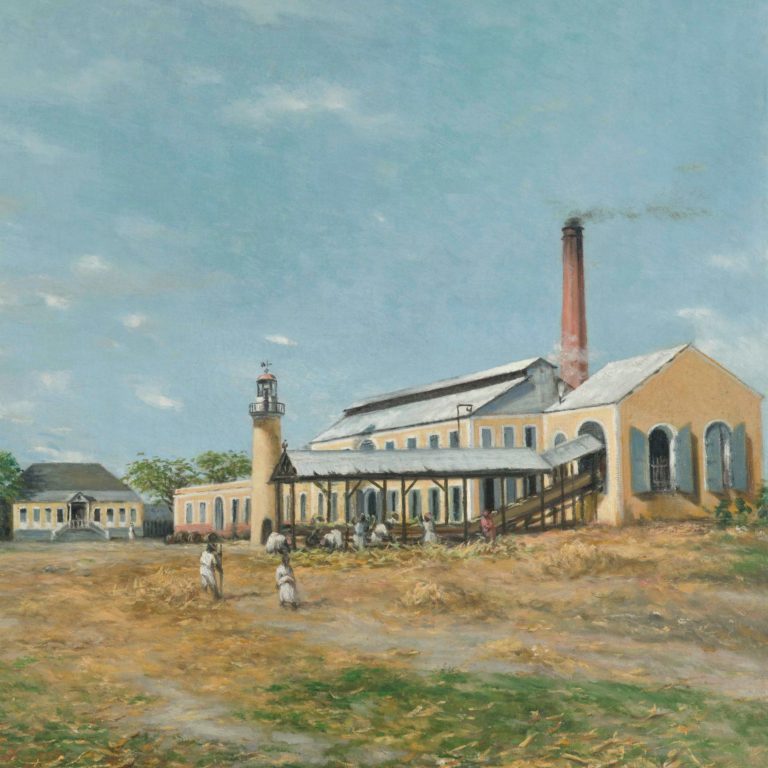 Impressionism and the Caribbean: Francisco Oller and His Transatlantic World

The Blanton Museum presents Impressionism and the Caribbean: Francisco Oller and His Transatlantic World, an exhibition of approximately eighty paintings by Realist-Impressionist painter Francisco Oller (1833–1917) and his contemporaries. Organized by the Brooklyn Museum and debuting at the Blanton, the exhibition reveals Oller’s important contributions to both the Paris avant-garde and the Puerto Rican school of painting. Providing historical, geographic, and cultural context for Oller’s work, the exhibition also features paintings by nineteenth-century masters Paul Cézanne, Winslow Homer, Claude Monet, Camille Pissarro, and others. The Blanton’s presentation also includes a small selection of works by contemporaneous Texas artists working on both sides of the Atlantic.

One of the most distinguished transatlantic painters of his day, Oller helped transform painting in the Caribbean. Over the course of his career, he traveled between Europe and Puerto Rico, spending considerable time in Paris. With each trip home, Oller brought with him the latest developments in early European modernism—including elements of Realism and Impressionism—and combined them with the artistic traditions of San Juan, revolutionizing the school of painting in Puerto Rico and throughout the Caribbean region.

Oller emerged from the relatively small art world of San Juan in the 1840s. After training in the San Juan studio of Puerto Rican painter Juan Cleto Noa, he traveled to Spain where he drew inspiration from works in the Museo del Prado and studied under Neoclassicist Federico de Madrazo.

However, it was Paris that truly captured Oller’s imagination. He made three trips there (1851–53; 1858–65; 1895–96), studying in the ateliers of Thomas Couture and Charles Gleyre, and was mentored by Realist master Gustave Courbet, whose influence can be seen throughout Oller’s career. In Paris, Oller affiliated himself with Paul Cézanne, fellow Caribbean artist Camille Pissarro (born in St. Thomas), and other members of the Impressionist and Post-Impressionist movements. He exhibited work at the Paris Salons (1864–65; 1895–96) and the 1875 Salon des Refusés. Oller spent nearly two decades in Europe working alongside the pioneers of Realism, Impressionism, and Naturalism, and, through his travels, participated in a vibrant exchange of aesthetic ideas, forging his own brand of international modernism while engaging social issues unique to the Caribbean.

Although he spent many formative years away from home, Puerto Rico remained Oller’s primary subject and source of inspiration. Lush, tropical landscapes layered with historical meaning, portraits of Puerto Rican intellectual figures, still life paintings of local fruits, and unidealized depictions of urban and rural labor are counted among the artist’s most loved and recognized works. Beyond his work as an artist, Oller also played a key role in educational reform on his native island, publishing influential treatises on art and ethics and founding ten schools and art academies, several of which were tuition-free and open to women.

Highlights of the exhibition include Oller’s Hacienda La Fortuna (1885), The School of Master Rafael Cordero (1890–92), and an intimate plein-air portrait of Cézanne. Cézanne’s The Village of Gardanne (1885–86), Monet’s Vernon in the Sun (1894), and Frederic Edwin Church’s Jamaican (1871), along with paintings by fellow Caribbean artists José Campeche, Pío Casimiro Bacener, and Esteban Chartrand, provide visitors with a greater understanding of the diverse cultural and artistic landscape in which Oller worked and thrived.

Impressionism and the Caribbean builds on the Blanton’s legacy of presenting groundbreaking scholarship on Latin American art and artists. After its premiere at the Blanton, the exhibition will travel to the Brooklyn Museum in New York and the Museo de Arte de Puerto Rico in San Juan.

From San Juan to Paris and Back: Francisco Oller and Caribbean Art in the Era of Impressionism, a book by Edward J. Sullivan, will accompany the exhibition.

In conjunction with the exhibition, the Blanton will host a variety of public programs, including:

NYU Professor, exhibition co-curator, and author of From San Juan to Paris and Back: Francisco Oller and Caribbean Art in the Era of Impressionism, Edward J. Sullivan, gives an insightful talk in the Blanton Auditorium.

Impressionism and the Caribbean: Francisco Oller and his Transatlantic World is organized by the Brooklyn Museum and co-curated by Richard Aste, Curator of European Art, Brooklyn Museum, and Edward J. Sullivan, Helen Gould Sheppard Professor of the History of Art, New York University. Generous support for the exhibition is provided by the National Endowment for the Arts.

Funding for this exhibition at the Blanton is provided in part by the Ralph H. and Ruth J. McCullough Foundation, the Scurlock Foundation Exhibition Endowment, the Terra Foundation for American Art on behalf of Board Member, Marilynn Thoma, and an anonymous donor.