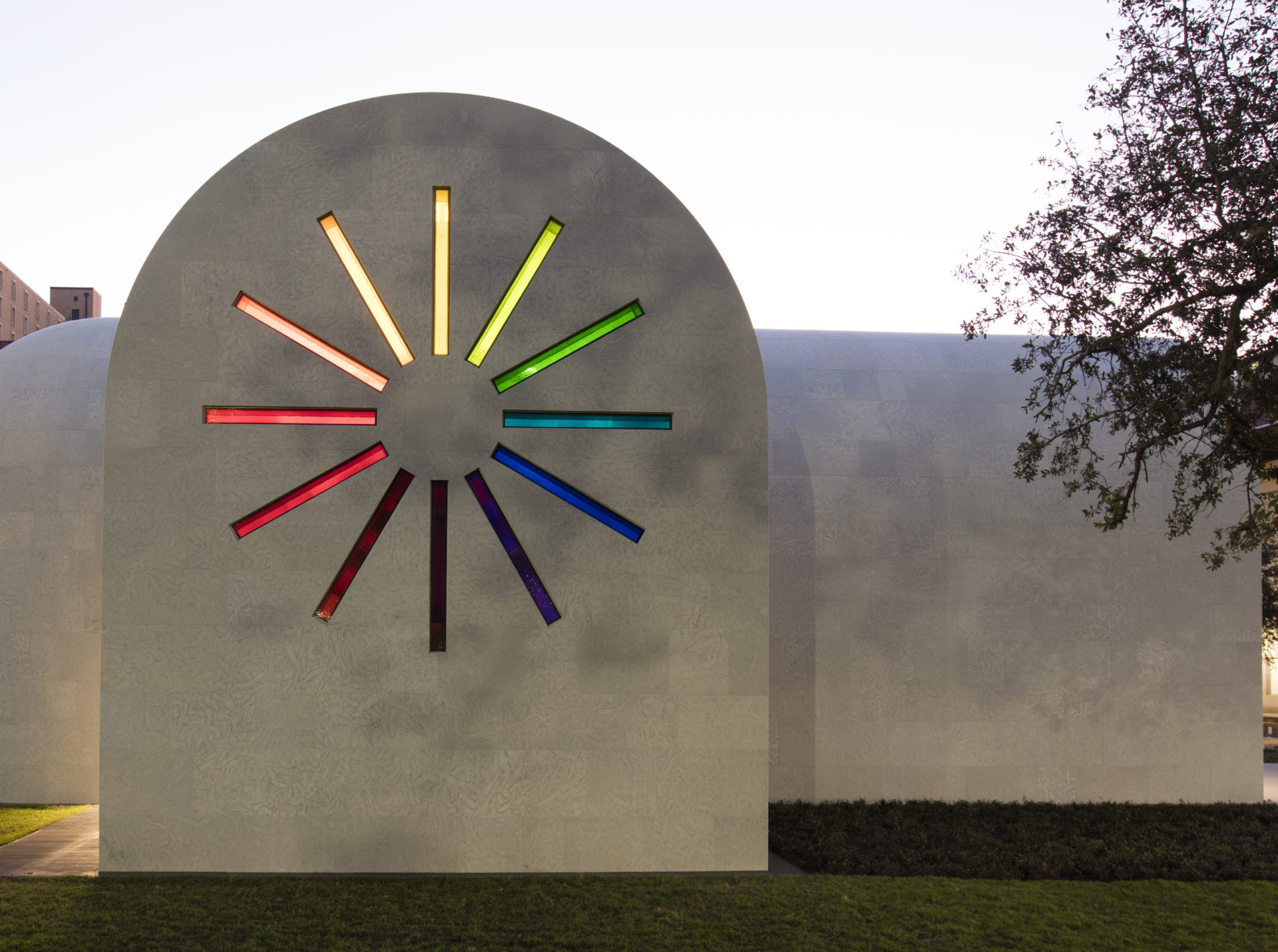 How do I visit Austin?

You must check in at the Visitor Services Desk in the Mari and James A. Michener Gallery Building (our main museum building) to receive a ticket that will allow you to visit Austin.

Austin is only open during museum hours: Wednesdays – Saturdays, 10am-5pm and Sundays, 1pm-5pm

Admission to Austin is included with the purchase of admission to the museum, the cost of which ranges from $5 to $12. Blanton Members; UT faculty, students, staff; teachers; and children 12 and under all receive free admission.

Is there an optimal time to visit?

The experience of Austin is unique at each time of day, and there is no suggested time to visit.

Wheelchairs are permitted inside, and if a visitor group would like to check out a wheelchair, please check with our Visitor Services Desk at the main entrance.

It can get hot in Texas; is there air-conditioning inside?

Austin is climate controlled and there is an air-conditioned system in place inside the building.

Can I bring my backpack? Are there lockers to store my belongings?

Backpacks and large bags are not permitted inside Austin. The museum’s lockers are currently inaccessible; consider bringing a small bag that is smaller than 11” x 15” with essentials just for this museum visit. Learn more about our rules here.

Where is the closest restroom?

There are restrooms located on the first floor of the Michener Gallery Building.

Can I take photos or video with my phone?

Photos and videos are permitted, but no flash photography.

Is there WiFi inside Austin?

UT students, faculty, and staff will be able to access University of Texas WiFi. There is no free WiFi for guests.

Can I listen to music inside?

Headphones are permitted.  You may not listen to music played through speakers in Austin.

Where can I store my wet jacket and umbrella if it’s raining?

A container for your umbrella will be available inside Austin during wet weather.  Please do not leave anything on the floors of the building.

Can we sit on the floor?

Yes, but do not lean against the walls or sculptures.

Are flash photography and use of a tripod allowed?

Is food and drink allowed?

No food or beverages or water bottles are allowed inside for the safety of the art.

Where can I find more information about Austin?

Visit kellyattheblanton.org or the Austin In Depth section on our website to learn more.

Who is Ellsworth Kelly?

American artist Ellsworth Kelly is regarded as one of the most important abstract painters, sculptors, draughtsmen, and printmakers. Spanning seven decades, his career was marked by the independent route his art took, diverging from any formal school or art movement, and by his contributions to 21st-century painting and sculpture. Kelly was born in Newburgh, New York in 1923. In 1970, he began living and working in upstate New York. He passed away in December 2015. His works are held in public and private collections worldwide.

Major retrospectives have been shown at the Museum of Modern Art (1973), Whitney Museum of American Art (1982), and Solomon R. Guggenheim Museum (1996), among other venues in the US and in Europe. In 2013, in celebration of the artist’s 90th birthday, special exhibitions were on view at the Museum of Modern Art, New York; Barnes Foundation, Philadelphia; Philadelphia Museum of Art; Art Institute of Chicago; San Francisco Museum of Modern Art; Tate Modern, London; Centre Pompidou, Paris; and National Gallery of Art and Phillips Collection in Washington, DC. In 2013, Kelly was awarded the National Medal of Arts, presented by the President of the United States.

Who built it/who is the architect?

Austin was originally designed by Ellsworth Kelly in 1986. The realization and construction of Kelly’s design and concept for Austin was overseen by a design-build team comprised of Overland Partners and Linbeck Group.

Why is it called Austin?

The title honors the artist’s tradition of naming particular works after the places to which they are connected. Other examples of this tradition include Dallas Panels (Blue Green Black Red), 1989 located at the Morton H. Meyerson Symphony Center in Dallas, TX and The Chicago Panels, 1989/99 located at the Art Institute of Chicago.

Austin is part of the Blanton Museum of Art’s permanent collection.

Why is this on UT’s campus?

Kelly gifted the design concept of Austin to the Blanton Museum of Art at The University of Texas at Austin in 2015. The original design for Austin from the 1980s for a private collector was shelved as it became more monumental in scale; however, Kelly was committed to ensuring that the project came to fruition. The ability for the project to be accessible to a wide public on a university campus was important to Kelly and encouraged him to give the design concept to the Blanton.

Where did the money come to pay for it?

In December 2017, the Blanton Museum of Art at The University of Texas at Austin completed a $23 million campaign to construct and fabricate Austin, build the endowment for the operation, care, and conservation of this singular work of art, and redevelop the grounds of the museum.

Are there other Kelly works to see at the Blanton?

Form into Spirit: Ellsworth Kelly’s Austin (February 18, 2018 – April 29, 2018) is an exhibition that explores the conceptual origins of Austin, and that features around 100 works by Kelly. Additionally, the Blanton currently holds High Yellow (1960), a significant early canvas by Ellsworth Kelly that was a gift from novelist James A. Michener and his wife, Mari, to the museum. The Blanton also has four drawings of leaves recently gifted to the museum by Douglas S. Cramer, and an untitled print gifted to the museum by Robert Rauschenberg.

The Blanton also has several Ellsworth Kelly works on loan including a sculpture, Untitled (Rocker VIII), from 1988 located on the grounds of Austin, just southwest of the building. The other works White Curve, 2003; Yellow Curves, 2015; Blue Red Green Black, 2004; and Green Blue Black, 1963 are on view on the second floor of the main museum building.

What is Austin made of and how big is it?

Austin is clad with 1,569 pieces of limestone from Alicante, Spain. The interior stone flooring and plaza flooring is granite from Georgia. The entry door is made from a native Texas live oak tree from the site of the Dell Medical School.

Austin has 33 mouthblown glass windows fabricated in Munich, Germany. There are 14 black and white marble panels on the interior walls of Austin; the black marble is from Belgium and the white marble is from Carrara, Italy. There is also an 18-foot-tall totem in Austin‘s interior, which is salvaged redwood.

Is it a chapel? It feels religious.

The architectural form of Austin was inspired by Kelly’s experiences of religious architecture in Europe, particularly France. However, Kelly intended Austin to be non-religious, inspiring reflective and spiritual experiences through its art.

Are there tours of Austin?

We do not offer tours of the space. Austin is intended for quiet and calm reflection.

Can I bring my students for a class, lecture, or tour?

We do not offer educational tours of the space. Students are welcome to visit for other purposes, though.

Will there be any public programs in the building that I can attend?

There is no public programming planned for the interior of Austin at this time.

Can I book Austin for a performance, event, or wedding?

No, Austin is not available for rentals.