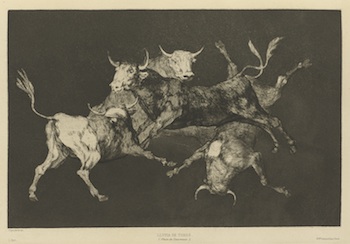 The Blanton Museum of Art at the University of Texas at Austin presents Goya: Mad Reason, an exhibition of nearly 150 prints and paintings by renowned Spanish court painter Francisco de Goya. The series of prints comprising Goya: Mad Reason—borrowed from Yale University Art Gallery’s distinguished Arthur Ross Collection—illustrate the artist’s mastery of forms and concepts as he grappled with the changing political and intellectual landscape of his native Spain in the early nineteenth century. Yale chose the Blanton as a partner for its Ross Collection sharing initiative, and the Blanton in turn selected Yale’s superb and affecting Goya prints as a foundation for this exhibition. Select paintings on loan from the Kimbell Art Museum, the Meadows Museum, and the Museum of Fine Arts Houston will further punctuate Goya: Mad Reason thematically and visually, offering new and insightful ways of understanding the artist’s prints.

“We are honored to partner with Yale University Art Gallery to bring selections from the renowned Arthur Ross Collection to Austin,” remarked Blanton Director Simone Wicha. “This project has also afforded us the opportunity to borrow paintings from other key institutions across Texas, offering further insight into the remarkable works of Francisco de Goya, an artist whose oeuvre touches on the very fabric of human nature, and whose profound creativity remains an inspiration centuries after his death.”

Among Spain’s most celebrated artists, Francisco de Goya (1746–1828) is sometimes considered the first truly modern artist. Edouard Manet, Pablo Picasso, Salvador Dalí and many other artists from the nineteenth and twentieth centuries looked to Goya’s art for inspiration, and he continues to serve as a touchstone for contemporary artists like Yinka Shonibare and Enrique Chagoya. Goya is known for his penetrating characterization of the human condition, his insightful criticisms of ignorance and oppression, and his unflinching look at the inhumanity of war.

Goya: Mad Reason highlights the artist’s treatment of war, bullfighting as a national pastime, and the instability of reason itself. His work makes visible the great transformations and unrest of Europe during his lifetime. Goya’s images manifest his hope for social progress as well as his disappointments. Against the traditions and vested interests of the populace, Church, and nobility, Spain’s liberal elites—many in Goya’s circles—sought and achieved economic and educational reforms from the monarchy throughout the 1700s. Fears of the French Revolution spreading instability, and Napoleon Bonaparte’s subsequent 1808 invasion of Spain, halted much of that progress. After the war, the reign of Ferdinand VII led to regression and repression. In 1824, Goya left Spain for a self-imposed exile in Bordeaux, France.

Goya’s art belongs to this history, yet it remains relevant for today’s viewers due, in part, to the themes explored in his works and his unique visual expression. The works exhibited in Goya: Mad Reason also reveal a shifting tension between objectivity, or reason, and irrational emotion. The partitioning of knowledge that flourished in Goya’s lifetime, as modern scientific thought grew in opposition to the humanities, underlies this development and persists as a basis of our own worldviews today. Goya: Mad Reason explores these issues across the artist’s prints and paintings, examining their historical and social power as well as the artist’s mastery across the media of painting and printmaking. Highlights of the exhibition include:

Support for this exhibition is provided by Jessica and Jimmy Younger and the Samuel H. Kress Foundation, with additional support from the Yale University Art Gallery’s Collection-Sharing Initiative, endowed by the Isabel B. Wilson Memorial Fund.