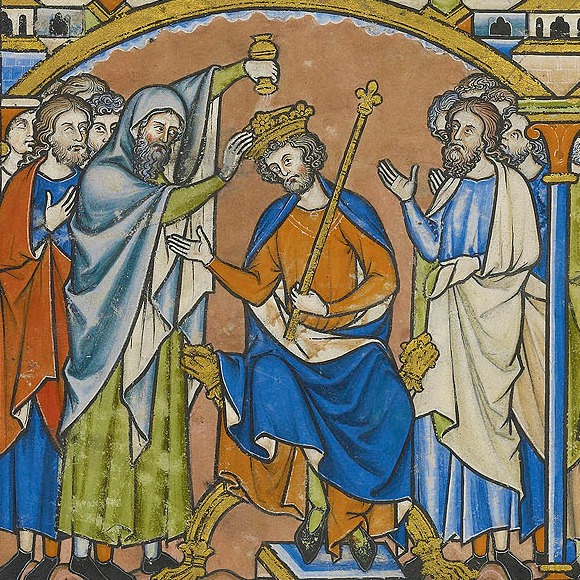 The Crusader Bible: A Gothic Masterpiece

The Blanton Museum of Art at The University of Texas at Austin presents The Crusader Bible: A Gothic Masterpiece, an exhibition of over forty unbound pages from the one of the most celebrated French illuminated manuscripts of the Middle Ages. On loan from the Morgan Library & Museum in New York, the Crusader Bible features Old Testament scenes in medieval settings, with brilliantly colored illustrations attributed to seven anonymous artists. To provide historical context for the Bible, the presentation features medieval arms and armor from New York’s Metropolitan Museum of Art. Also included are sixteenth-century Persian illustrations from the Metropolitan and the Ardashīr-nāma, a seventeenth-century Judeo-Persian manuscript of Old Testament stories from The Jewish Theological Seminary of America in New York.

“We are delighted to bring this rare and exquisite manuscript to Austin,” remarks Blanton director Simone Wicha. “Not only a beautiful work of art, the Crusader Bible has a rich and complex lineage that will engage and immerse our visitors in 700 years of world history. We are grateful to The Morgan Library & Museum, The Metropolitan Museum of Art, and The Jewish Theological Seminary of America for the opportunity to share these treasures.”

The history of the Crusader Bible is fascinating, covering seven centuries and multiple continents. Likely created in Paris during the 1240s for King Louis IX of France—famous for building the Sainte-Chapelle and for leading two crusades—the Bible then passed to the king’s younger brother, Charles of Anjou, who took it to Italy. More than four centuries later, the Archbishop of Cracow acquired and offered it as a diplomatic gift to the great Shah of Persia, ‘Abbas I. By the eighteenth century, the manuscript belonged to an anonymous Persian Jew. After its journey from France to Italy, Poland, and Persia, the Bible traveled to Egypt, England, and finally to The Morgan Library & Museum in the United States. The Crusader Bible, which originally had no text, bears inscriptions in Latin, Persian, and Judeo-Persian. They function as evidence of its changing ownership throughout the centuries and reflect how each owner used his language to lay claim to the book, appropriating its imagery for assimilation into their respective cultures.

The illuminations include some of the most compelling visualizations of the Old Testament, bringing Bible stories to life through vivid images that reflect medieval culture and the world of the Crusades. Designed to resonate with thirteenth-century French viewers, biblical characters are depicted as battling knights, equipped with contemporary arms and armor, and situated within medieval French towns. Loans from the Metropolitan Museum, including a shirt of mail, sword, prick spur, and war hat, will augment visitors’ understanding of the weaponry featured in the Crusader Bible.

Alongside the Christian perspective reflected in the Morgan’s manuscript, the exhibition offers Muslim and Jewish viewpoints on biblical narratives, revealed through Persian illustrations of the story of Joseph from the Metropolitan’s collection and in the manuscript of Esther and Ahasuerus from the Jewish Theological Seminary’sArdashīr-nāma. Collectively, the works serve as a powerful reminder of the common roots of Judaism, Christianity, and Islam, and underscore the complex intersection between the politics, culture, and religion of the period.

Generous funding for this exhibition is provided by the Still Water Foundation, with additional support provided by the Scurlock Foundation Exhibition Endowment, Sarah and Ernest Butler, Jessica and Jimmy Younger, and donors who contributed to the 2014 Annual Fund.