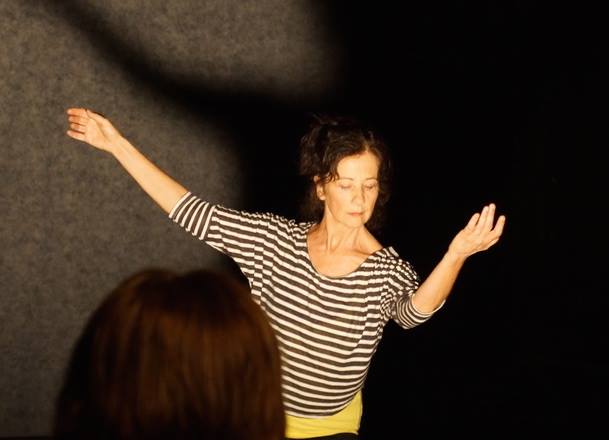 Join us for a free 55-minute workshop exploring the Deeply Listening Body with Arts Hall of Famer / and Deep Listening© practitioner Heloise Gold. Heloise will introduce participants to her practice

Join us for a free 55-minute workshop exploring the Deeply Listening Body with Arts Hall of Famer / and Deep Listening© practitioner Heloise Gold.

Heloise will introduce participants to her practice of listening with the body as a tool for self-care & empathy along with an introduction to Pauline Oliveros’ Sonic Meditations.  This event will take place in the Capitol Room of the Edgar A. Smith Building.

Heloise will also be inviting visitors to take part in a short participatory work at our main SoundSpace: BioSounds concert event on Sunday, November 4th .  Learn more about the event HERE.

ABOUT HELOISE GOLD
Originally from New York City, Heloise Gold trained in ballet, performing as a young teen with the Bolshoi and Kirov Ballets during their early visits to the US (1962-64). In her early 20’s her interests shifted to experimental forms. She performed in Robert Wilson’s legendary twelve-hour opera The Life and Times of Joseph Stalin (1973); studied and performed with Simone Forti (dance) and was a member of Quena Company (an Open Theatre ensemble.) She moved to Austin in 1978 and danced and toured with the Deborah Hay Dance Company from 1980 to 1985. In 1980 she began creating original full-length works. Heloise was a key player in the experimental work spawned in Austin in the 1980s, and continues to create new work with many Austin artists. She co-leads Deep Listening Retreats with New Music pioneer/composer Pauline Oliveros and author Ione in the US and Europe and also runs week-long T’ai Chi Retreats annually in New Mexico. Her book Deeply Listening Body was published in 2008.